Tracks in the snow

The snow in my garden over the past couple of days has offered me a fascinating insight into the behaviour of the animals that live there.

The stray cat who lives in my garden, who I've called Sin, has clearly taken up residence in an old coal bunker. I'm quite pleased, really, because the coal bunker will not only shelter him from the wind, rain or snow, it only has a very tiny entrance - about the size of a cat flap - so I would imagine he can sleep there undisturbed by the foxes.

And talking about the foxes, they are clearly still using the den in the leaf pile at the end of my garden. Yesterday, I saw tracks going in and out of the den. Then, just now, I saw one of the foxes emerge from it and walk towards to house, pick up some food I had left out for wildlife, then carry it back to the den in its mouth. 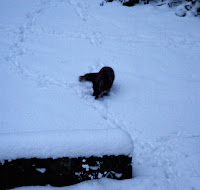 I managed to take the photograph on the right, but it was quite dark and distant, and I was taking the picture through window glass, so the picture is a bit blurry. However, I am reasonably sure that the fox I saw was the one that was limping a few weeks ago, because it had a distinctive kink in its tail. It isn't limping now, so that is good news.


As well as feeding the foxes, I am still feeding Sin. Every morning he comes to my back door for a bowl of cat food. Tracks in the snow have also told me that earlier in the morning he came up to the French doors at the back of the house and left a liquid calling card outside.


Sin looks healthy, has obviously found shelter and doesn't seem too bothered by the snow, but I admit I am coming to the conclusion that I will have to find a new home for him. He still fights with my indoor cats whenever they encounter each other, so I can't bring him indoors, but I can't help but think he would be happier in a warm house in this bitter weather.