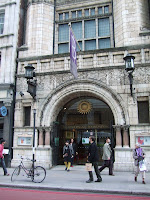 I bought my ticket for the London Lore conference back in January, and had been really looking forward to it, but it was still a tough decision to go there rather than head into the woods for the Pagan Federation London's Beltane festival last Saturday, April 25.

Outdoors enjoying the spring or indoors in a stuffy conference hall? Dancing and chatting or sitting on a hard chair taking notes? Wine and cakes or gulping down coffee between lectures?

If you've been reading my blog for a while, I bet you think I went to the party - but I didn't. I went to the London Lore conference organised by the Bishopsgate Institute with the South East London Folklore Society and I don't regret my decision one little bit.

It was a day full of fascinating talks on a variety of subjects from traditional customs to modern urban legends.

The morning session began three different looks at seasonal celebrations, starting with May Day - which is, of course only a few days off. Sarah Crofts talked about Fowlers Troop and the Deptford Jack in the Green, a revival of an old May Day custom of dressing a man up in greenery and parading around town with music and festivity. I'll be writing more about Jack in the Green celebrations on A Bad Witch's Blog later this week, just before May Day itself.

Sarah was followed by Sonia Ritter, who is a member of The Lion's Part theatre company, which puts on Twelfth Night, October Plenty, May Games and St George's Day pageants in London and other cities.

Doc Rowe, who has been photographing folk customs for many years, gave a contrasting view of seasonal celebrations with slides showing how retail chains have taken over so many old traditions, with cards for all occasions, mass-produced fancy dress costumes and disposable plastic tat.

Rats, ravens and foxes followed morning coffee, in talks by Paul Cowdell and Noel Rooney. Both pointed out how people see these creatures as visitors to our city, although it is an environment we all share. Folk tales about these urban creatures often credit them with being much smarter than they really are, and much more of a threat than they really pose.

Richard Barnett talked about folklore, medicine and the body, covering such things as body snatching, primitive medicine and people's time-honoured delight at creating folk art in the shape of improbable genitalia.

Before lunch, London Lore organiser Scott Wood regaled the audience with the urban legend of the helpful terrorist; a hoax email about a bomb warning "leaked" by the terrorist to a girl who helped him a day or so before the supposed attack.

One of the most important London folklorists of the 19th century was Edward Lovett, an avid collector of amulets, charms and folkloric material. His legacy is so important that three speakers - Steve Roud, author of London Lore: The Legends and Traditions of the World's Most Vibrant City

, historian Neil Gordon Orr and Ross MacFarlane of the Wellcome museum, all spoke after lunch about the man and his collection, which is now spread across many museums in London and further afield.

Things turned a little more weird and wonderful towards the end of the day, as Mark Pilkington talked about The Brompton Cemetery time machine - something I intend to visit for myself and write about on a Bad Witch's Blog soon. John Constable, author of Southwark Mysteries

, talked about his fight to get a memorial garden for the dead of the Crossbones Graveyard.

Finally, Antony Clayton looked at the folklore of London pubs, before the conference ended and the delegates and speakers themselves all headed down the road to Dirty Dick's pub.

It was a great day and has certainly given me plenty of inspiration for places to visit - and, of course, write about.

For more details about talks at Selfs, visit http://members.lycos.co.uk/skitster/

For details about lectures and events at The Bishopsgate Institute, visit http://www.bishopsgate.org.uk/