Benten: Goddess of the Week 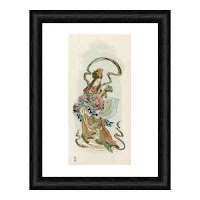 Continuing the past two week's theme of the sea, The Bad Witch's Goddess of the Week is Benten, a beautiful Japanese sea goddess who rides a dragon and brings prosperity to those who worship at her water-side shrines. She is also described swimming through water accompanied by sacred white snakes and sometimes plays a harp.

Benten is also known as Benzaiten and her worship travelled from India to Japan with the spread of Buddhism in the 6th Century.

"Benten is eight armed. Six of her hands clasp a sword, a jewel, a bow, an arrow, a wheel and a key. The other two are clasped in prayer. Legend tells how she came to earth to save the children from an evil dragon."

The website www.godchecker.com/ describes her as a goddess of good fortune and says:

"The only Goddess among the Shichi-Fuku-Jin team of Good Luck Gods. Love, sea, music and literature are among her specialities. Ben out of ten for this one."

The print of Benzaiten or Benten by Mary Evans

pictured is available through Amazon