Oysters, pearls and treasure from the sea 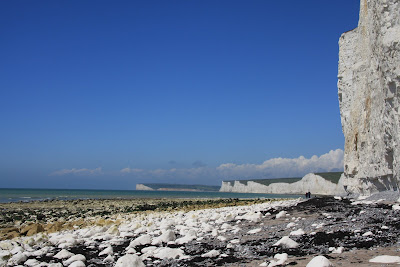 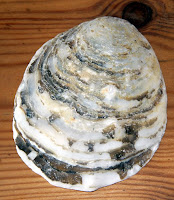 While beachcombing the other day I found an oyster shell. No pearl inside it, sadly, but to me it was still a small treasure from the sea.

I have always loved collecting shells, but some are easier to find than others. I have - perhaps rather sadly - still got a children's book called Find 50 on the Seashore

, which scores seabirds, marine plants, seaweed, sea creatures and shells according to their rarity. An oyster is worth 30 points out of 50.

Of course, a live oyster would be more of a catch, although I have been told fresh ones were traditionally only in season from September to March. This was because in the summer months, when the weather is hot, there was more danger of them going off quickly.

According to Celtic Folklore Cooking

by Joanne Asala: "The best way to eat them is raw, just like our ancestors did."

The book goes on to say that ancient Celts enjoyed eating oysters and deemed pearls found inside them to be sacred. It states:

"The cauldron of regeneration is said to have been lined with pearls, and the Goddess, when she appeared in the guise of the moon, was sometimes called The Pearl of the Sea. Pearls were believed to be made of moonlight and water and so should only be worn at night."

Pearls are actually formed when foreign material becomes trapped inside an oyster shell. The oyster produces nacre, a combination of calcium and protein, which coats the foreign body and creates a pearl.

Oysters are also well-known for their reputation as an aphrodisiac. In Greek mythology, the Goddess of love Aphrodite - who gave her name to the word "aphrodisiac" - is said to have risen from the sea on an oyster shell. If she cried, her tears formed pearls.

Appropriately, Celtic Folklore Cooking recommends them for a Beltane supper. Personally, I would ignore traditions and eat them any time of the year, in the right company, ideally washed down with a bottle of sparkling wine!

..."formed when foreign material becomes trapped inside an oyster shell. The oyster produces nacre, a combination of calcium and protein, which coats the foreign body and creates a pearl."

substitute a few word in the except above, and you have a decription, poetic not literal - of a pregnant womb. Its not a surprise these symbols remain...

Jenny, that's a very interesting observation. Thanks for pointing that out.

Lovely shell and a lovely pic of the shore, too!

Where exactly are you on vacation? I once visited the UK many, many years ago, and saw some of the beautiful white cliffs. A sight to treasure.

I'm staying in East Sussex, a few miles from Beachy Head. It is a place I visit quite often because my family has a holiday home there.