Harry Potter and the Sussex Downs 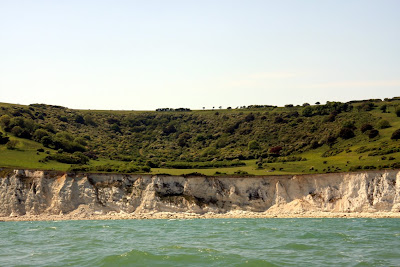 I'm still on holiday until the end of the week and I hope those reading my blog aren't tired of seeing my holiday snaps.

The weather was gorgeous last Sunday and I went into Eastbourne because I had seen adverts for an Italian market along the seafront.

Sadly, the market wasn't too exciting - less than a dozen stalls selling pizza, olive oil, Italian sweets and the like - but there were plenty of other things going on and the beach, pier and promenades were full of people enjoying the Victorian seaside resort in traditional Bank Holiday fashion. Ice cream, fish and chips, exposed flesh and sunburn were everywhere to be seen.

As I walked past the end of the short row of Italian vendors I saw a boat offering trips to Beachy Head Lighthouse and back. The last excursion of the day was just leaving, so I promptly bought a ticket and clambered on board.

The 45-minute journey past the town's beaches and along the foot of the chalk cliffs of the Sussex coast included a commentary by the ship's captain. He pointed out a wooded vale (pictured) about half way between Eastbourne and Beachy Head, which he said was filmed as the location for the Quidditch World Cup on the movie Harry Potter and the Goblet of Fire

The film company Warner Brothers apparently thought the downland countryside was the perfect setting as a secluded magical location for the wizardly sporting championship, and filmed in the area in 2004. However, none of the leading actors came to Eastbourne because only backdrop scenes were being shot there.

Eastbourne, the downlands and Beachy Head have been settings for several other movies over the years including Angus, Thongs and Perfect Snogging; Pearl Harbour; James Bond: The Living Daylights; Tommy and - as I mentioned on my blog the other day - Quadrophenia.

In the movie Robin Hood Prince of Thieves, Kevin Costner as Robin makes an amusingly unlikely detour to Beachy Head on his way from Dover, in Kent, to Nottingham, via Hadrian's Wall on the borders of Scotland. According to the script, Robin says they will do the journey by nightfall, yet the entire trip would be more than 400 miles!

Maybe they made use of Harry Potteresque portkeys to speed up the journey.