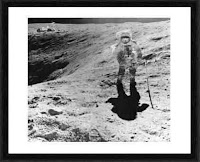 There is a lunar eclipse during the full moon tomorrow, July 7.

It is the second of four lunar eclipses this year, but is unlikely to be visible to the naked eye because it is only a partial eclipse of the southern most tip of the earth's penumbral shadow.

Lunar eclipses only happen when the moon is full, making the magically powerful time of the full moon more unpredictable. It can be a time of high emotions, a time of change or a time when things that were hidden rise to the surface. It can even be a time when we are forced to face our nightmares - or when dreams start to come true.

For me, overshadowing the eclipse this month, July 2009, is the anniversary of when one of the human race's most important dreams become reality - when men set foot on the moon for the very first time, in July 1969.

OK, I do realise that many people believe the whole moon landing thing was a hoax using trick photography and special effects on earth in Hanger 51. I'm always willing to keep an open mind, but nevertheless I am happy to recall and celebrate the sense of excitement and wonder I felt as a child sitting up late to watch Neil Armstrong and his colleagues in Apollo 11 make that first trip to the moon.

For everyone I knew then, it was as real as real could be, yet at the same time it was the stuff of legend - of science fiction - of myth in the making. It was, indeed "The Right Stuff" in every way. It was a feat of exploration, of scientific achievement, a victory for the US in Cold War politics and it was important because the moon has symbolised so much to so many for so long - it was as though we were one step closer to physically touching our gods.

As Rick Stroud, author of The Book of the Moon

, points out in a feature on timesonline, and as pagans are well aware, for countless millennia, the moon was a deity, not a destination. In his feature, Rick lists his 12 favourite lunar deities - male and female - with the young and dashing Indian moon god Chandra in first place.

Also on timesonline, author Jeanette Winterson explores the symbolism of the moon and its importance to writers, artists and dreamers. She says that it was a 1955 Disney film, Man and the Moon that prompted President Eisenhower to announce three month's later that the US would be sending a satellite into space, and to then embark on the race to the moon.

She points out that for many in the modern world the lines between "science" and "fiction" are blurred. What people can imagine, tell stories and write fiction about, quickly becomes something we want to make reality and, in the case of space travel among other things, can do.

To my mind, this connection between the imagination and the ability to make real is closely akin to the power of magic.

So this full moon, especially at the time of the eclipse, do be careful what you wish for, it might come true.

. Prints are available through Amazon. The Book of the Moon

by Rick Stroud is also available through Amazon.

Links
Charles Duke collecting samples at the Descartes landing site during the Apollo... from Heritage-Images

The Book of the Moon

The moon is very mysterious... Thank you for some interesting facts!