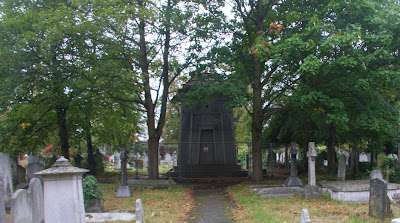 The moment I heard about the Brompton Cemetery Time Machine - at the London Lore conference earlier this year - I knew I had to see it for myself. After all, who could resist a tale of Egyptian tombs, royal mistresses, a weird scientist who may have been murdered to prevent his invention falling into the wrong hands - and a locked door with a missing key to a strange building for which no floor plans have been found, but which may hold the secrets of time itself.

The story centres on an Egyptian-style mausoleum in Brompton Cemetery - and I finally got to visit it on a crisp autumn day in October, in the approach to Halloween.

Brompton Cemetery, in the London Borough of Kensington and Chelsea, was established in 1836 and opened in 1840 as one of Victorian London's much-needed new burial grounds at the time. It is run by the Royal Parks and is unusual in that it is the only Crown Cemetery.

Another unusual thing about Brompton is that, as graveyards go, it has very few ghosts. London's other cemeteries - such as Highgate, Nunhead and Kensal Green - are most decidedly haunted, but the dead at Brompton seem to genuinely rest in peace.

That is, unless tales of time travel are to be believed - first revealed to the public in newspaper headlines in the last decade of the 20th century.

"Shrouded by trees in the middle of London's Brompton cemetery stands a strange, imposing structure carved with elaborate Egyptian-like figures that has been exciting the interest of writers and researchers. The 150-year-old mausoleum is the only one in the cemetery for which no plans can be found.

"Its occupants are a mysterious trio of spinsters about whom almost nothing is known. Intrigued by the tomb, writer Howard Webster began researching its origins and now believes the 20-foot tall building was a time machine built by a maverick Victorian genius, Samuel Warner, who also invented the torpedo. Warner is buried in an unmarked grave about 70 feet from his creation and in another nearby grave lies his likely collaborator, architect and Egyptologist Joseph Bonomi."

What adds to the mystery is that some people believe Warner, who was in negotiations over his plans for aerial bombs and sea mines with Duke of Wellington, commander in chief of Britain's army, was either murdered to prevent his designs for weapons falling into the wrong hands, or by someone who stole them from his dead body. However, others believe Warner was either a crackpot or a fraud whose inventions could never have worked.

Warner's colleague Bonomi was in the team of Egyptologists and archaeologists who first deciphered the hieroglyphic texts found on papyri in Egypt's Valley of the Kings.

James Mackay, a spokesman at Brompton cemetery, reportedly said at the time of the Reuters story: "It could be that some of the papyri they were decoding dealt with time travel."

. They also came up with the idea that the ancient Egyptians might have had devices that could transport people through time and space - a concept used in the film and TV series Stargate

Webster speculated that if Warner and Bonomi had come up with plans for a time machine, they would have needed considerable funds to build it. Their backer could have been the three women who supposedly occupy the tomb - Hannah Courtoy and her two daughters Mary Anne and Elizabeth.

Courtoy was not Hannah's real name, but one she used for convenience because she was the mistress of wealthy merchant John Courtoy. She outlived him and some speculate that she later became the mistress of royalty. She knew Bonomi and may have funded his expeditions.

The Reuters story went on to explain why Hannah's tomb was thought to be a time machine:

"The trapezoid of dark polished granite is decorated with narrow bands of carved hieroglyphics and has a huge bronze door for which there is no surviving key. It has not been opened for more than 120 years. Sixty feet away, Bonomi's gravestone bears similar hieroglyphic carvings including the Egyptian god of the dead, Anubis, sitting on what appears to be a replica of the mausoleum. Webster believes this is a vital clue to the mausoleum's secret. The direction Anubis is facing - toward the mausoleum - suggests in Egyptian mythology a soul lost out of time."

In 1998, Mackay said he thought that Warner was a hoaxer who might have conned the Courtoys into believing he could build a time machine. However, he added: "The biggest mystery is that you couldn't build anything in the cemetery without plans and there are no plans. His choice of the cemetery was a shrewd and appropriate one ... it was one of the few places where one could work unobserved and where even the most eccentric of structures could be explained away. A cemetery where the wealthy and famous are buried is also a location that one could say with great certainty is unlikely to be the subject of redevelopment over time ... like Egyptian tombs, where structures could remain intact over centuries.''

Hannah Courtoy died in 1848, but her mausoleum was not finished until 1853 - the same year Warner died and when Bonomi's headstone stone was erected. Webster said: "I like to believe that Warner's is not the body in the unmarked grave but that he is still alive and travelling through time in his machine.'' 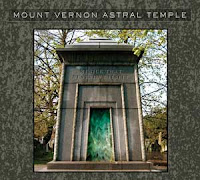 The story of the Brompton Cemetery Time Machine grew in fame in 2003, when the Courtoy mausoleum was used as the cover picture for the ambient electronic album Musick That Destroys Itself

Yet the album's title could almost be considered a premonition, because not long after it was released, the mausoleum began to self-destruct. Chunks of granite began to fall from its surface and cracks appeared in the lintels above the doors.

Someone I spoke to in the cemetery, who did not give their name, said: "It could be entropy catching up with it or might have been struck by lightning while journeying through time. Who knows what could happen if it malfunctioned?"

"I wouldn't stand too close," they added.

Arthur Tait of the Friends of Brompton Cemetery gave a far more rational explanation for the damage. "It was caused by frost two or three winters ago," he told me.

He said: "It will cost several thousand pounds to have it restored. Unfortunately, the Royal Parks do not have the necessary money available. We have told them that the Friends would be willing to contribute a bit towards the cost, however no action yet. I hope we can get progress on this next year."

At the moment, the mausoleum is in a sorry state, with lumps of fallen rock lying at its base, its steps overgrown with weeds and its main metal doorway tarnished and discoloured. It is surrounded by a wire fence with signs warning people to "Keep out".

Time machine or not, it would be a shame if the mausoleum is left to crumble. Perhaps some mysterious benefactor, strangely attired in outlandish clothing, will turn up one day soon to donate the necessary money to restore it to its former glory? I do hope so... 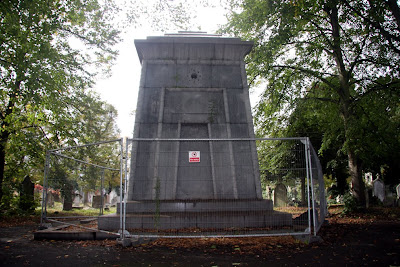 http://www.brompton-cemetery.org/
Musick That Destroys Itself

I was very interested to read this posting as I did some research on this subject for a short story, Christmas in Brompton (published in Estronomicon - http://seanwoodward.com/blog/?p=59). I was in contact with a surviving relative of the sisters (the key does still exist) and Drew Mulholland of Mount Vernon Astral Temple who kindly sent me a copy of the CD. There is also a track about the Time Machine on the new Gothick album I'm currently working on (myspace.com/gothickofficial).

Sean - Thanks for those links, I'll have a look at them. Glad the key still exists. Do let me know if you ever find out what really is inside the mausoleum!

Wonderful research you've done! I am so impressed, last I checked in on this mystery it was relegated to the backwaters of message boards. Thank you so much for posting new images and other information to inspire the imagination!
Would it be OK to link to this post from my new blog? I was preparing a post about the Time Machine when I found you have pretty much nailed it.
Let me know, thanks a million.
Lou

Lou - I would be very happy for you to link to my post on your blog. Thanks very much for your comments and good luck with your new blog.

Having lived for 13 years in a flat overlooking the cemetery, I know the place very well. I worked as a volunteer for the cemetery, clearing graves, recording plot names numbers and descriptions etc.
We were told the story relating to that particular tomb was a Victorian family clubbed together to buy the plot and have it built for the elderly - and despotic - ruler of the clan while he was alive. He took one look and said "You won't put me in that foreign monstrosity!" and was buried elsewhere. Trouble was, the fees had been paid up in full for over 100 years so no one else could use it. thus it remains empty.

Possible folklore/anecdote of the Brompton though.

After a good deal of research into the matter, I've found exactly bupkis regarding inventor Samuel Warner. No documentation of him ever existing, beyond side mention in stories talking about the Time Machine itself. Additionally, the torpedo appears to have actually been invented by one Robert Whitehead, and not in fact Mr. Warner. Surely a maverick inventor who was murdered mysteriously would have left some kind of record, had he ever existed, if at very least because people love to talk about such people.

I went to Brompton Cemetery on Saturday, and I was fascinated by this vault.

I hadn't heard of it before at all, so I did a little research afterwards, and regardless of how much of the story you wish to believe, it's a great story nonetheless.

I'm going to investigate it further because it's really taken my interest. I doubt I'll learn more than is already known by others, but I know I'll enjoy trying to piece together different parts of the puzzle.

If anyone has any further knowledge or speculation that they wish to share regarding Hannah, her relatives, the vault or any other part of the tapestry of stories, please do get in touch, as I'd love to hear it.

I am shortly to publish a book telling the story of John and Hannah Courtoy (Peters) based upon Journals written at the time. Its stranger than fiction, believe me!

Courtoy's Complaint by David Godson is now available on Amazon and tells the real-life story of Hannah and her daughters, involving greed, conspiracy and betrayal.

I am very happy to see such interest in Hannah's mausoleum, mostly because I know she would not enjoy being the subject of our curious minds.

I was in London last year, the mausoleum was all fixed up, clean but still quite ugly, despite the beautiful wildflowers growing all around it.

I said my piece, out loud, using my Australian vocabulary. I Hope Hannah heard every word. What I had to say was not complimentary!

I am trying to contact Stephen Coates, who is organising an event about the mausoleum as a time machine this coming Sunday (20th December). Does anyone know about the event or how Stephen can be contacted?

I don't know anything about that event, but I'd be interested in the details too.

I too would be interested in tge evnt and contacting Stephen. (mail@seanwoodward.com)

Let's all face it Richard godson has the key .