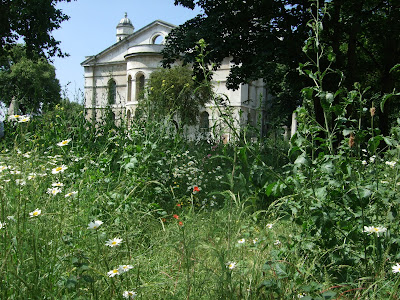 Midsummer Eve is traditionally a time for divination and spells to see into the future. In bygone centuries, young women would often perform acts of folk magic - such as gathering wild flowers growing in a churchyard and putting them under their pillow - in the hope of dreaming of their future husband.

For us witches, however, divination is a thing to be taken more seriously, so I decided it was time to dust down my crystal ball.

I mean that literally as well as figuratively. It had been sat on a shelf, gathering dust, for some time.

Now, to clean a crystal ball you don't just spray a bit of mass-produced cleaner on it and polish it up with a J-cloth. You have to go about these things properly.

Ritual cleansing in mugwort tea is something I have often seen recommended as the right way to cleanse both mundane house dust and unwanted negative energy from scrying devices, so I thought I'd try it out before the Summer Solstice.

Dried mugwort is easy to obtain. Most witchcraft supply shops sell it and you can also order it via Amazon.

To clean a crystal ball, you first need to make mugwort tea by infusing a spoonful of the dried herbs in a cup of boiling water. I used my round-bottomed porcelain teacup that I normally employ for tea-leaf reading. It was the right shape and size, and seemed more appropriate than a coffee mug, which is better for dunking a chocolate HobNob than a crystal ball .

Wait until the tea is cool, then carefully immerse the crystal ball in the liquid and leave it for a few moments, before drying it off. You can say a few words while you do this, such as "may this crystal be cleansed of all impurities", if you feel like it.

Some people like to take a few sips of mugwort tea because it is reputed to boost psychic powers, particularly when scrying. If you do decide to try this, I'd recommend drinking a little before you dunk your grubby crystal ball into it.

However, there is a health warning that goes with mugwort - it is slightly toxic. Probably because of that, herbalists have sometimes prescribed it as a laxative or to get rid of intestinal parasites. Applied externally, by rubbing it on your body, it is supposed to offer protective powers against hostile spirits.

Do consult a qualified medical herbalist or your doctor before drinking mugwort tea, and never take mugwort if you are pregnant as it can cause miscarriages.

I didn't drink any myself - I didn't want to be rushing to the toilet instead of gazing into my crystal ball - but I did inhale the vapour that rose from the cooling liquid. And I have to say even that was enough to make me feel my consciousness altering. I felt more psychically aware and receptive to any messages my crystal ball might choose to show me.

After drying and polishing my crystal ball - using a black silk scarf rather than an old tea towel from the kitchen - it seemed to sparkle as never before.

Then I set it on its stand and gazed into it.

And I definitely began to see things. In the past, I had often struggled to successfully scry using my crystal ball, but this time shapes and patterns formed quickly.

Interpreting them is the hard part, but I have learnt that it is often best not to try to analyse things too much while you are actually scrying. Just make a note of what you see and feel, then return to your notes later to try to make sense of them.

After I had finished, I made sure to ground myself properly, by having a proper cup of strong English breakfast tea and a couple of choccy biccies. Just the job.

Mugwort can also be used to help promote prophetic dreams. So, if this Midsummer Eve you fancy trying out that old folk magic to dream of your future lover, add a little mugwort to the wild flowers you gather to put under your pillow.

Happy dreaming, and a happy solstice!
The photo of wildflowers in a churchyard was taken by myself, the Bad Witch. The Mugwort For Protection and Psychic Visions 50grms

pictured above right can be ordered via Amazon

Really enjoyed reading that,hope that you have a Happy Solstice!
Warm Wishes,
Cally

Mugwort can be quite a kick in the ass if you're not ready for it. Smells, or a dab of Harry's mugwort jelly, will certainly do you for scrying.