Angels and Demons of Peckham Rye 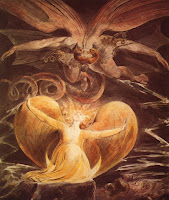 People living near Peckham Rye, in South London, are complaining about being woken in the dead of night by what they call "weird demonic chanting" coming from the depths of Peckham Rye Common.

One resident wrote on the East Dulwich Forum: "Did anyone hear this last night at about 3am? Really scary - could hear it from our flat. What's all that about?"

Another replied: "It happens about three or four times a week, always 3AM, and drives me insane."

Others have also heard the strange sounds, and have attributed it to such things as a Black Mass or Faustian performances.

However, one skeptic asked: "What makes you think it is demonic?" Which is, of course, a very sensible question.

I assume - hopefully correctly - that very few people in Peckham are actually in the habit of conversing with demons - or, indeed, are demons themselves.

Peckham Rye is certainly considered a dangerous place to live – according to Wikipedia "Peckham is a high-crime area with high levels of gang violence". But I'd guess the break-ins, muggings and gang fights the area is notorious for are committed by human criminals rather than denizens of Hell or any other infernal plane.

Wikipedia also provides some interesting snippets about the occult history of Peckham Rye - but interestingly that has more to do with angels than demons. It states:

"In 1767 William Blake visited Peckham Rye and had a vision of an angel in a tree. In 1993, at the request of the Dulwich Festival, artist Stan Peskett painted a mural of Blake's vision next to the Goose Green playground in East Dulwich."

Could it be possible that the mysterious chanting is, in fact, an attempt to contact Blake's tree-hugging angel?

I was once invited to take part in an angelic magickal ritual from a Rennaissance grimoire - though not on Pekham Rye Common I hasten to add.

This primarily involved standing robed in a candlelit circle and chanting the names of angels, but, I would have to say, that there was nothing particularly angelic-sounding about those names. They weren't just the names of famous angels such as Gabriel - they were little known ones with names that were unfamiliar and hard to pronounce.

I've never taken part in any demonic ritual - from dusty old grimoires or otherwise - but I'd hazard a guess that one might involve chanting the names of demons, which would sound just as unfamiliar and hard to pronounce as angels' names.

Out of curiosity, and to do a rough comparison, I decided to look up the names of angels and demons on Wikipedia. Sure enough that wonderful source of information had a page of each and, as I suspected, I couldn't have told an angel from a demon just from its name. Have a look for yourself at http://en.wikipedia.org/wiki/List_of_theological_angels and http://en.wikipedia.org/wiki/List_of_theological_demons and see what you think.

However, if I was inclined to look for conspiracy theories, I might think that this ritual on Peckham Rye Common was simply a small part of some terrible master plan.

Remember that strange stone I found by William Blake's grave in Bunhill Fields just over a year ago?

The stone was surrounded by red rose petals and on it was written the words:

At the time I was fearful of confronting zombie Blake, summoned from his grave by a spot of lunchtime necromancy. But perhaps it was just the start of something far worse - a plan to raise the visionary artist as an undead vampire to rule over London in some twisted version of Jerusalem built on dark, satanic mills.

Perhaps it would be a good idea to investigate those other areas of London associated with Blake and find out if any demonic chanting or signs of necromantic rites have been discovered there too.

Of course, if you happen to know what's really going on at Peckham Rye in the dead of night, do let me know by leaving a comment or emailing badwitch1234@gmail.com

This is a brilliant post - ok if I re-post it on the SELFS site?

ahhahaha zombie Blake, you kill me