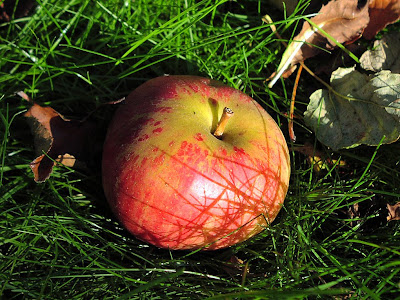 I have a lovely apple tree in my garden. I even had it pruned earlier in the year because I was told it would produce larger apples as a result. It did.

Sadly, most of them fell to the ground while I was away in Sussex enjoying an autumn equinox holiday.

Although I have picked up a lot of windfalls, and used as many as I could, many went to waste.

However, the apple season is still not quite over and National Apple Day is still to come, on October 21.

National Apple day began in 1990, when an organisation called Common Ground set out to create a new calendar custom to celebrate the UK's most versatile fruit and the beautiful orchards they come from.

Common Ground held the first Apple Day on October 21 in 1990 in the old Apple Market in Covent Garden, London, bringing fruit back there for the first time in 17 years. The event has since gone from strength to strength and has been countrywide through nurseries, fruit farms, restaurants, the National Trust and RHS gardens, museums, art centres, community groups and schools who celebrate the day in their own place, in their own way.

Apple Day provides an opportunity for people to celebrate and enjoy apples, orchards and all the customs, rituals, songs, drinks, recipes and wildlife associated with them. It also reminds us of our reliance on the land and the importance of a healthy relationship with nature.

Sue Clifford of Common Ground said: “Apple Day is not a marketing device, its creation has been impelled by altruism and idealism for living better with nature – the apple and the orchard are symbols of hope. They demonstrate how we can have our trees, bees, bats, butterflies, birds and badgers whilst growing good fruit to eat and drink.”

Although National Apple Day is a new annual festival, it comes at the around the same time of year as the ancient pagan festival of Pomonia, in honor of the Roman orchard goddess Pomona. Pomonia took place each year on November 1, to mark the end of the apple harvest. It was celebrated with fun and games that might have included apple bobbing - now a traditional Halloween pastime.

Apple Day events are taking place throughout October. To find out more details about activities taking place near where you live, visit the National Apple Day website at http://www.england-in-particular.info/cg/appleday/a-events.html

by Geraldine Bracey, which includes a wealth of folklore about apples plus a variety of traditional games played with apples during the harvest season, over Halloween and throughout the year.