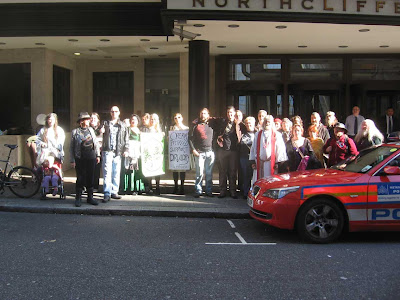 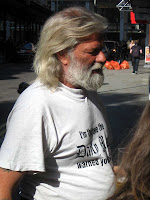 These great pictures of the pagan protest outside the Daily Mail offices - complaining about a feature by Melanie Philips' which many pagans found offensive - were sent to me by Tony Smetham.

He said: "Here are a few pictures I took yesterday outside the Daily Mail offices and Press Complaints Commission yesterday.

"I hardly think we're likely to get the Daily Mail to change its attitude but it was great fun anyway. King Arthur was there in white robes, although I thought the T-shirt he was wearing underneath was rather more appropriate! (pic enclosed).

"Musical accompaniment was provided by Corwen, who not only plays but makes his own instruments. All in all, a grand day out!"

Thanks very much Tony, for sending the pictures and the details.

It's great to see them protesting against that article! Power to the people!

It's nice to see that there trying to make a deferents.