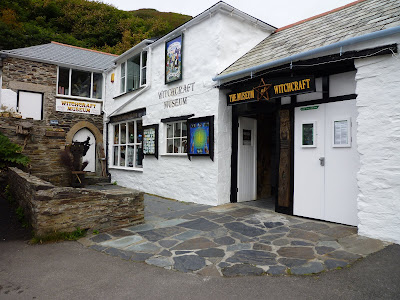 This is a picture of the Museum of Witchcraft, in Boscastle, Cornwall. It was taken by Clare Stannard, who recently visited the museum while on holiday.
Clare said: "I loved the area. Very faery! Boscastle was beautiful. The museum was good."
I must admit I am jealous - although I've holidayed in Cornwall many times in the past, I've never visited the Museum of Witchcraft. In fact, I first heard about the museum while watching the TV series A Seaside Parish, which was filmed in Boscastle at the time of the flood (I mean the Boscastle disaster of 2004, not the Biblical flood

.)
Watching A Seaside Parish, which followed the activities of a Church of England vicar new to the area, I was impressed by the way in which people of all faiths and outlooks on life worked together to get over the tragedy that had struck the town and to rebuild their lives. What a shame witches and Christians can't always get on that well.
According to the TV programme, the Museum of Witchcraft was one of the less badly damaged properties and about 90% of the collection survived - although the ground floor and basement were flooded and considerable restoration work was required to clean mud off the documents stored there.
The Museum of Witchcraft houses items relating to witchcraft and magic, with a bias towards English and Cornish artefacts.
It first opened on the Isle of Man in 1951, the same year the Witchcraft Act was repealed, and was run in partnership by Cecil Williamson and Gerald Gardner. However, the two men fell out and Cecil eventually sold the museum to Gerald. The museum moved to Boscastle in the 1960s, where it has remained. Since the flood, the building has been restored and the exhibition space improved.
According to the museum website, it currently holds the largest collection of witchcraft-related artefacts and regalia in the world. It has recently published a book called 60th Anniversary: The Museum of Witchcraft - A Magical History, which costs £34.
On each Pagan Eye post, I show a photo that I find interesting, with a few words about it. I'm not quite sure what I'll be including - it could be a seasonal image, a pagan site, an event, or just a pretty picture.