A Few Views of Stonehenge 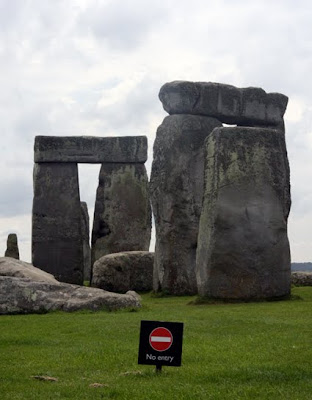 I took these photos at Stonehenge last Sunday. I stopped off at the famous megalithic stone circle in Wiltshire while on my way down to Cornwall on holiday.

Before I went, I had mixed feelings. “It’s a real tourist trap,” friends told me. “You can’t get near the stones,” others pointed out, while a few felt I shouldn’t go out of principle, because they disapproved of the way English Heritage had managed the site in the past.

But I wanted to go, to judge for myself. I hadn’t been to Stonehenge since I was a kid and at that time you could just wander up to the stones and touch them. The problem was, some people had been doing more than touch them, even prising off bits to take away as souvenirs, which was why Stonehenge needed to be protected. 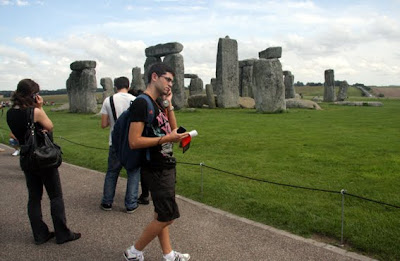 These days, a tall fence encompasses the site and you have to either be a member of English Heritage or pay to get in. The car park and main entrance are actually over the road from Stonehenge itself. You queue to buy your ticket or show your pass, then go past a small security check in which I saw a few people have their bags examined. After that you queue again to get an audio guide that tells you about the stones as you walk round. After starting to listen to the commentary, you walk through a subway under the road which takes you to the path that leads up to and around the stone circle itself.

The path is separated from Stonehenge by a rope - low enough that it doesn’t obscure your vision of the stones, but thick enough that it is clear you shouldn’t cross the line. There are obvious no entry signs too, to make it clearer.

Now, I don’t think this is entirely a bad thing - quite apart from the need to stop vandalism. The fact that even on really busy days you can get a clear view of the megaliths and take photographs without lots of tourists in the shot is useful for photographers like myself. Even though I deliberately took some pictures of the crowds - as you can see - I also managed to get some shots of Stonehenge looking pretty empty of people. Even the wide shots contained just a few people on the edges - easy enough for anyone with a modicum of Photoshop skill to remove.

I didn’t feel the place was overcrowded, even though Stonehenge is, without doubt, an extremely popular tourist attraction and was very busy on the sunny summer Sunday that I went. There was plenty of space to move about in. You could get a clear view of the stones and for a rest you could sit on the grass - or even on a bench if you could find one free. 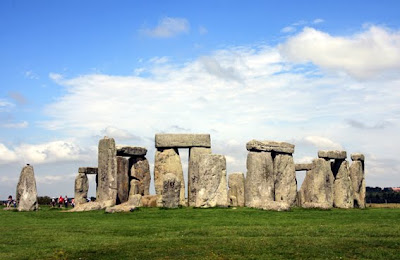 However, my visit to Stonehenge the other day definitely wasn’t a spiritual experience. When my parents took me to the stone circle when a kid I remember seeing people meditating - and I vaguely recall my dad having a go at dowsing for ley lines, which was a popular activity for alternative types like my parents back in those days. Last Sunday, I saw nothing of that kind taking place. It wouldn’t have felt appropriate at all.

English Heritage promotes Stonehenge as a site of historical and archaeological interest. That is what the audio guide concentrates on, although it does mention that people still visit the stone circle at the solstices for spiritual reasons and also relates some of the legends about the site.

If you do want to get up close to the stones to try to experience their spiritual meaning for yourself, English Heritage allows managed open access at the Summer Solstice and also, I believe, allows druids to celebrate the sunrise there at the Midwinter Solstice. Seeing as current thinking based on archaeological evidence is that our ancient ancestors used Stonehenge for ritual purposes in midwinter rather than midsummer. Perhaps that is a more appropriate time to go there and I should put it on my list of things I want to do.

However, I would say that if you have never been to Stonehenge, visiting as a tourist these days and walking around the outside of the stones while listening to the audio guide and taking a few pictures is worth doing. I enjoyed my visit and got some good photos to add to my collection. It was really much better than those friends who tried to dissuade me from going had said. 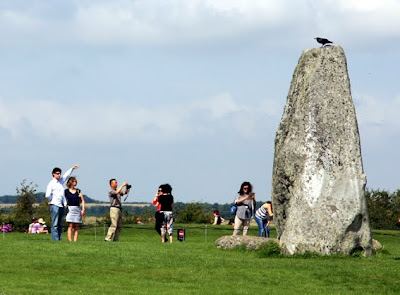 Links and previous related posts
http://www.badwitch.co.uk/2012/06/why-ive-never-been-to-stonehenge-for.html
http://www.english-heritage.org.uk/daysout/properties/stonehenge/
A Guide to the Stone Circles of Britain, Ireland and Brittany

I prefer Avebury - but I went to Stonehenge back in the days when you could touch them.

I don't think I had posted this comment previously (if so, just kindly ignore me!). But was recently in UK from the States and had chance to go to Stonehenge. Turns out we didn't make and stopped in Avebury instead. WOW! I had no idea the site was so large and open, and there was hardly anyone there. My friend and I had the West Kennet barrow all to ourselves (and whatever spirits were there, too!). Add in a misty, overcast day, and the experience was refreshing and inspiring.