In Search of London's Camelot and the Grail As promised, here are more photos of London’s Camelot – a moated island in Trent Country Park in North London that is currently called Camlet Moat, but once genuinely bore the name of Camelot on historic maps. Obviously, no one can say for sure if this Camelot was ever the site of King Arthur’s famous castle, but plenty of people like to think that it might have been

If you’ve been following my blog, you will know that I decided to visit Camlet Moat after reading a book called London’s Camelot and the Secrets of the Grail by Chris Street. I went there one Sunday morning a couple of weeks ago and posted a photo of it, promising to write more later. Here goes.

Although it is possible to get to Trent Park by train and underground, it turned out the trains weren’t running the day I wanted to go, so my husband kindly offered to drive me there. It was a bright morning, but very cold and we had to scrape ice from the windscreen before setting off.

The ground was still frozen when we arrived at Trent Park over an hour later. It was one of those clear, crisp winter days when the fallen leaves on the ground are frosted with ice crystals that glitter in the sunshine. It is the kind of sparkle than can make anywhere seem a bit magical.

Camlet Moat is not well signposted within Trent Park. It is hidden in dense woodland and surrounded by a wooden fence with just a couple of small gateways. Unless you know it is there and worth visiting, you would probably walk straight past it.

Luckily, I knew where I was going and had noted the directions on the English Heritage website, which are pretty good. After ten minutes or so of navigating windy woodland paths, my hubby and I came to the entrance to Camlet Moat. You can see the fence and little gate in the picture above (together with a silhouette of me taking the photo if you look carefully). 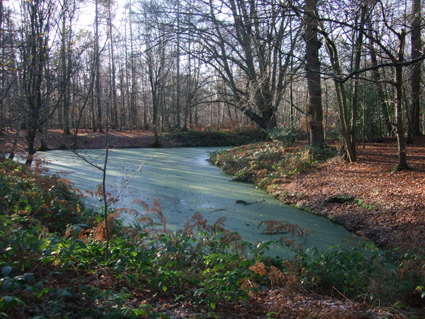 Once inside through the gate, you come to the moat. It is a wide stretch of water nearly completely enclosing a square-shaped island that can only be reached by a narrow path. At one time, according to archaeologists, an impressive wooden bridge crossed the waters and a signpost near one of the gates gives a description of what that was like.

The water in the moat is bright green. The colour is caused by thick algae, which you would think might be a bit grim, but I thought added to the sense of strangeness and otherworldliness of the area.

The words of the poem La Belle Dame Sans Merci came to my mind “The sedge has withered from the lake, And no birds sing.” Certainly the area was very quiet, and the trees and shrubs had withered with the season. Unlike the lady of the poem, however, I had no intention of leading my lovely hubby to the lake and abandoning him there “Alone and palely loitering.”

The island in the middle of the moat is anything but dismal and forlorn. It is clearly a place that many hold in reverence. It has inspired people to leave beautiful offerings such as the tree decorations in the picture to the right and the delightful owl in the picture above left.

I was very taken with the owl. I know owls seem to be in fashion this season – jumpers with owl prints are in all the shops and, in fact. I have one myself. But I've also been seeing owls quite a bit in meditations and dreams recently, and have been reminded that one of my favourite books as a child was The Owl Service

by Alan Garner. I really don’t know why owls are cropping up in my life quite so often but somehow seeing the owls at Camlet Moat made this seem particularly significant. 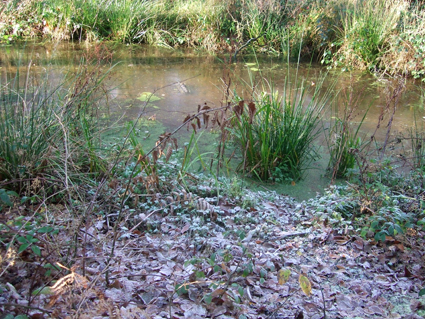 My husband and I walked all around the island, which doesn’t take too long. There was no one else in sight all the time we were there. It was peaceful, beautiful and magical – even though it was very, very cold.

Again I was reminded of Keats's poem and in my mind's eye "I saw pale kings and princes too". It was easy to imagine that we had somehow stepped out of the everyday world and crossed into the land of Avalon where knights in armour still quested for the Grail, King Arthur lay sleeping and a merciless fairy enchantresses could entice lonely travellers with her beauty to keep them in her thrall.

The only thing that marred the site was the inevitable discarded litter. Now I guess it is possible that the squashed cardboard cup I photographed was in fact the Holy Grail heavily in disguise – and indeed my idea of what the Grail might serve could well be a hot cinnamon latte – but frankly I doubt it.

My only regret was not bringing a bin sack to clear up other people’s rubbish as my gift to the sacred and magical site before I left. 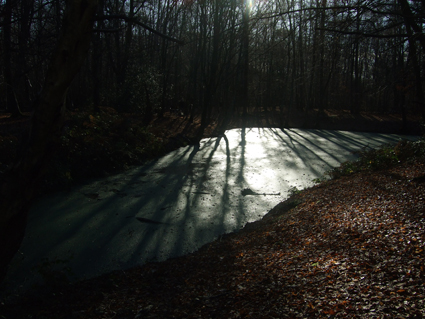 That is a *beautiful* place. How interesting. I used to live very near Trent Park, and went there a lot, but I never heard about this island. Now I want to go back and explore :) Thanks for the pictures!

A lovely article and beautiful photos - I wrote Geoffrey de Mandeville and London's Camelot: Ghosts, Mysteries and the Occult in Barnet (1997) upon whose research a lot of more recent books/articles have been based. A new and updated edition is in preparation to be published by Barnet Museum (for which I acted as Archaeology Officer for some 20 years). I was wondering if there was any chance I could use your 'sacred tree' photo in the book (with full acknowledgment of course)? I can be contacted via my Facebook page Ghosts of Barnet or via email jennifercobban@aol.com

Trent park is a lovley place. I grew up round oakwood and took dirtbikes there. There was a time me and a friend took our dogs there and came across the island. Both dogs hairs stood on end and started growling rediculously. They would not enter the island.
A later day me n my friend returned with a few others and enterd the island. I had a bad feeling and told evryone not to touch anything.
Withing trees we see witch look like home made stick voodoo dolls. (blair witch protect)
only way i can think of discribing it.
It was a wet morning but in this particular tree it was bone dry and there was a black book in there surrounded by rybons and these voodoo stick men. We all got freaked can hear funny noises. As we walked round we noticed candles in trees and at certern spots, as we returned to the front of the island there was 3 candles lite. But we no 100% we was the only ones there.
This was 2/3 am in morning.
I still love this park and go there when i can. Even tho iv moved miles away.

does anyone know when the witches go an practice there?

Patry, I find that rather surprising. Devil worshippers, UFOs and the second coming all at the same time :) Sounds like Trent Park is where it is all happening then. Do send a photo - especially of the UFO and maybe a selfie with Jesus? ;)