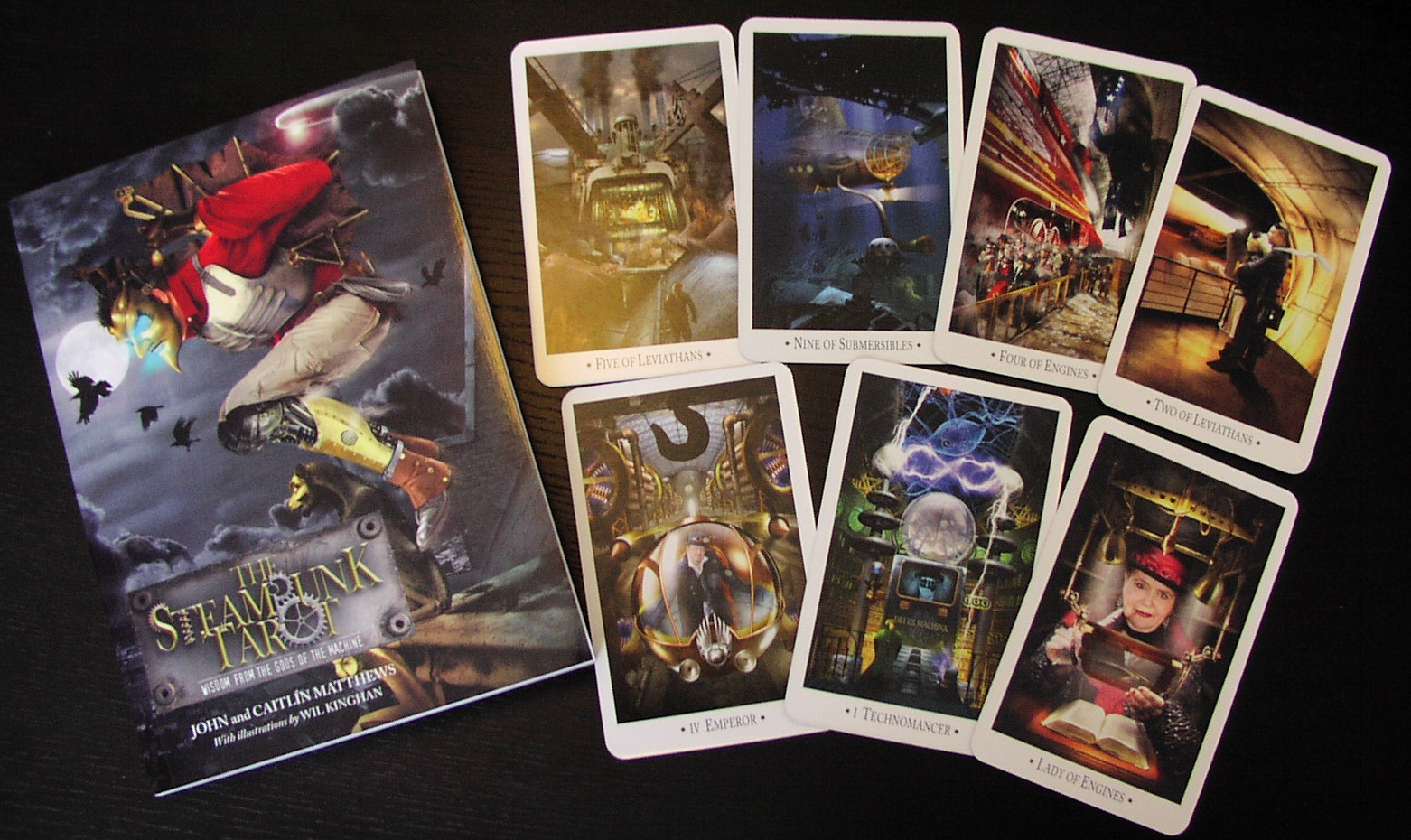 Most tarot decks are set in some alternate reality. The vast majority depict a mythic past, long before the age of the industrial revolution. For the ubiquitous Rider Waite tarot and the plethora of decks based on that, this is a psuedo-medieval world of knights in armour. The Greenwood and Wildwood tarot show an ancient woodland inhabited by tribal people, shamans and natural beasts; other decks are inspired by Celtic mythology or various tales from our legendary past.

The new Steampunk Tarot: Wisdom from the Gods of the Machine

turns all that on its head.

This deck looks to the future rather than distant history, yet it is an alternate future based on the science fiction of the Victorian age, such as the novels by HG Wells and Jules Verne, as well as modern Steampunk literature by authors including James P Blaylock, Tim Powers and Philip Pullman.

Each suit is based on a type of machine: airships, submersibles, engines and leviathans. The cards depict these – and the inventors, explorers and engineers using them – with wonderful artwork that reminds me of the front covers one used to get on science fiction paperbacks in the mid 20th century. There are giant robots, airships soaring above the clouds, submarines exploring ancient underwater ruins, a gleaming rocket flying to the moon and a lone man standing beside his time machine watching a star explode in a night sky.

This is a world of adventure, inhabited by people who dare to make their dreams come true through bravery, ingenuity, passion and determination. The cards are sometimes dark – they show conflicts and obstacles that must be faced – but they are also optimistic that we can resolve our problems and be the masters of our own destiny.

We are not slaves to fate. By using the tools we have to hand and the gift of human ingenuity we can create the future we desire. It is this emphasis that makes The Steampunk Tarot: Gods of the Machine different from some more traditional tarot decks.

I am sure there are those who will not want to try this tarot deck because they suspect it is just relying on the current trend for Steampunk fashion to make sales. Personally, I think they would be missing out. This is a serious tarot deck, well designed and lovely to use.

It is created by John and Caitlin Matthews with art by Wil Kinghan – all of whom have produced other highly respected tarot sets and divination systems in the past – and they have put considerable thought, time and effort into making this a truly original, workable and beautiful system.

The Steampunk Tarot: Wisdom from the Gods of the Machine boxed set includes a 78-card set and 160-page guidebook. It is published by Connections, which also produces The Wildwood Tarot

Links and previous related posts
http://www.badwitch.co.uk/2013/01/steampunk-tarot-gods-of-machine-launch.html
http://www.steampunkimperium.com/
http://www.connections-publishing.com/
The Steam Punk Tarot: Wisdom from the Gods of the Machine