Kenneth Grant and Tantra - A Talk at Treadwell's 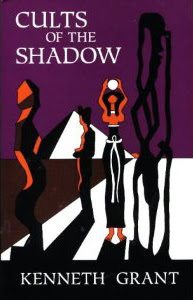 On Tuesday evening I went to a talk called Kenneth Grant: Dracula's Tantric Rituals. The speaker was Alistair Coombs and the event was at Treadwell’s bookshop, in London.

I’ve heard Alistair talk before – at the book launch for Beelzebub and the Beast at Treadwell’s a few months ago – and I knew he was an engaging and knowledgeable lecturer. However, I came away from this week’s talk realising I need to do more reading up about Kenneth Grant.

Alistair described Kenneth Grant as “the most original occultist of the latter half of the 20th century”. Grant was born on 23 May 1924 and died on 15 January 2011, he worked with Aleister Crowley during the older man’s final days, and went on to assimilate his ideas and reassemble them in a highly creative manner, Alistair explained. Grant formed an Ordo Templi Orientis  - or OTO - group in 1951, which eventually became the Typhonian Order. Grant spent much of his life living in London.

Both Crowley and Grant were into sex magic. In his 1975 book Cults of the Shadow,

Grant fused Crowley’s Thelema with Tantra (which is a form of ritual yoga and meditation rather than specifically sex magic). Alistair Coombs said: “This combined with ideas from witchcraft, including the importance of the feminine and the Kali and lunar cycles.”

It has to be said the Kenneth Grant’s books are generally considered a bit weird. Many of his most famous books were originally published around the time of the 1970s – when weirdness was counterculture high fashion. He combined magic with material from science fiction and tales of horror, such as the Cthulhu Mythos of HP Lovecraft.

As I said before, I came away from this week’s talk knowing that I need to do more reading up about Kenneth Grant. I found the talk fascinating, but realised I don’t know enough about this important London occultist.

Oh well, learning where one has a gap in one’s knowledge is still learning. And I suspect I'll be buying a few more books to fill that gap.