Druid Oracle App Now Out On Tablets and Smartphones 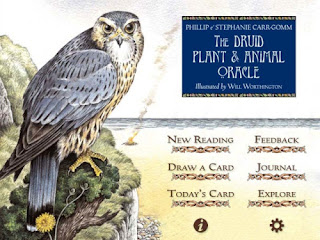 Thanks to a friend on facebook, I learnt that the Order of Bards, Ovates and Druids has released an app called The Druid Animal and Plant Oracle for iPads and smartphones

This is based on the books and card illustrations that come with the Druid Animal Oracle and Druid Plant Oracle boxed sets.

Author of the decks and OBOD leader Philip Carr-Gomm, says on his blog: "It really is quite extraordinary. For a start, it offers the entire contents of both books and all the card illustrations. It also offers all the spreads given in both books and can combine cards from both decks or give readings from one specified deck. It has a journal so you can keep track of your consultations. It even speaks to you! (and you can turn the voice off if you want). And when you want to shuffle the cards it offers riffling, washing or cutting as options – amazing to watch!"

I'm a keen collector of tarot decks and oracle cards, but I've never owned either The Druid Animal Oracle or The Druid Plant Oracle in dead tree format. Although I don't yet have a smartphone or a tablet computer, as I explained yesterday, I persuaded my husband to download the app for his iPad. It was pretty cheap too, at £2.99.

Since then my husband and I have been using the app to pick a card each morning and also do more in-depth spreads As well as being easy to use, the readings have been pretty good. Even my normally skeptical husband has been enjoying it.

To get it, go to the App Store and search for ‘Druid Oracle’. And if you like the Wildwood Tarot, I noticed the App Store also had that for iPods and iPhones.