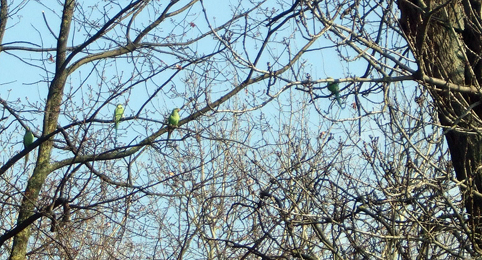 I took this photo of rose-ringed parakeets in Regent's Park on a sunny day last week. Although parakeets are not native to the UK, the colourful birds have become quite a common sight in West London since the 1990s - and the flocks are increasing.

Small numbers of parakeets have been spotted in England since the 19th century, but no one knows quite why they have been doing so well in the past few decades. There are also several theories about where they came from. The simplest explanation is that they bred from a pet pair that got loose. Other ideas are that they escaped during the filming of The African Queen in 1951 or that they are the descendants of a pair of parakeets released by Jimi Hendrix in Carnaby Street in the 1960s.

As they are normally caged birds, seeing a parakeet flying in the wild symbolises freedom - but can also indicate a lack of analytical thinking. Maybe it is time to let instinct lead the way out of a situation that is really only a gilded prison.