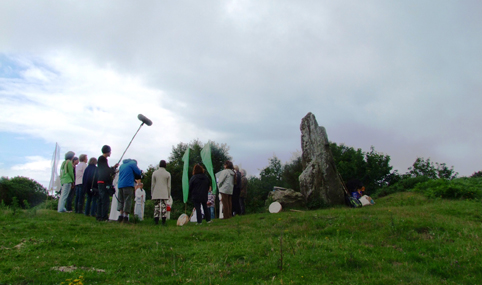 The photo above shows the filming of a new travel and alternative health TV series called Soul Seeker that is due to be broadcast on Travel Channel (Sky 251) from April 8th to 12th.

In Soul Seeker, travel and alternative health expert Jo Sinnott visits three continents to find some of the best, most authentic retreats on the planet, according to the press release I was sent. Her journey takes in India, where she practises yoga on the banks of the Ganges, rural China to learn tai chi, California for all things New Age, Greece where she unleashes her inner musician and more.

The press release goes on to say: "Jumping head first into the learning, the lifestyle and the philosophy, Jo practises with gurus and masters, opening herself up to everything from alternatives diets and medicine to music and meditation. All in the pursuit of the ultimate sense of Well Being!"

Episode One. Soul Seeker: India – Aarti and Ashrams
Jo travels from Delhi to the Himalayan towns of Rishikesh and Haridwar during pilgrimage time. She meets swamis, gurus and sadhus, and experiences ashram life, practising yoga, meditation and ayurveda, and living side by side with the locals. She bathes in the Ganges' healing waters, witnesses sunset ceremonies, is given an uncannily accurate ayurvedic reading in a backstreet clinic and is brought to tears in a yoga class like no other. Jo leaves India noticeably moved and spiritually charged - ready to change her life!

Episode Two. Soul Seeker: Isle of Wight – A Life Lived Wild
Jo joins an evolutionary fitness bootcamp on the Isle of Wight, where she runs barefoot across the island’s cliff tops, carries rocks across its beaches and eats meals sourced entirely from its land. Feeling at one with nature she forages the coast, climbs trees with a local arborist and agrees to swim the Solent with the island’s local wild swimmers. Prior to ‘the big swim,’ she joins the druid community’s Solstice rite, where she is given a druid blessing and some powerful tree essence for strength and courage. Will that be enough to see her to the other side?

Episode 3. Soul Seeker: California – Raw Food and Laughing Yogis
Jo travels to California in search of the ultimate alternative experience. She enjoys an acrobatic session on the monkey rings in Santa Monica with an ex homeless artist, and meets the people for whom alternative lifestyle is mainstream. Outside LA, she is brought to utter hysterics by the ‘Laughing Yogi’ of Palms Springs (where she is left snorting, crying and gasping for breath), samples a raw food meal in a new age commune in Ojai, and has a near out of body experience during a ‘Watsu’ session in the Sierra Mountains. Finally Jo hits San Francisco and enjoys a cool acro yoga jam in the park overlooking the bay.

Episode 4. Soul Seeker: Skyros – Holistic Happiness
Jo Sinnott embarks on a music and creativity course on a community living project on the Greek island of Skyros. In a bid to free her own creativity she tries soul writing, music therapy, sound healing, and even takes a crash course in guitar playing. She contributes to everything from diplomatic community meetings to morning yoga, to music and song writing sessions. She tries abseiling, but it proves less frightening than her final challenge – to perform in front of her new friends at the last night cabaret.

Episode 5. Soul Seeker: China – Tai Chi and Moon Cakes
Jo Sinnott travels to Guangxi province in rural China to practise tai chi with a female master, and learn more about traditional Chinese medicine. She meets an 88-year-old Kung Fu master who shows her a trick or two (very Karate Kid), learns martial arts, is given an intense acupuncture session in a local clinic, and has a very interesting ‘blind massage.’ She ends her stay in rural China with a group of friends at the Moon Festival, before heading back to Shanghai to test her tai chi skills with locals on the Shanghai Bund - an ultimate 21st Century skyline.

The photos on this page are from the Isle of Wight episode. I am also being sent a preview DVD, which I'll review on A Bad Witch's Blog after I've watched it.

I think at the moment it is only on Sky :(