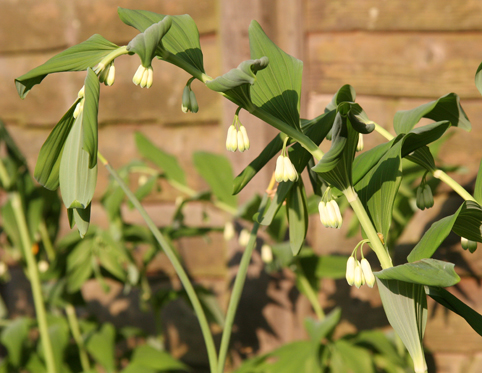 One of my favourite plants that grows in my garden from May to June is Solomon's Seal. It has gently curving stems and little cream-coloured bell-shaped flowers, as you can see in the photo above. It is also a very magical plant, associated with healing and protection.

Solomon's Seal is shown next to comfrey in the Druid Plant Oracle deck, because in the past it was used by herbalists in a similar way. Both plants were used to help heal broken bones and cuts. Solomon's Seal was particularly used to heal bruises and other minor skin conditions, usually by the roots being made into a poultice or ointment.

It is the roots that give the plant its name, because the roots have depressions that look like the royal seal of King Solomon. It is probably also this that gives the plant its reputation for magical protection. According to the famous tales and legends, the Seal of Solomon was the symbol on a signet ring owned by King Solomon that allowed him to control demons and genies. In traditional folk magic, the plant Solomon's Seal can be used for exorcisms and to protect a home from evil spirits. It can be infused in water then sprinkled over an area, or the dried roots can be placed in the corners of a room or at each compass point of a building to keep out unwanted influences.

What I particularly like about Solomon's Seal is that it grows in a damp, shady corner of my garden and appears to be reasonably resistant to slugs. If it keeps evil spirits out as well as garden pests, all the better.

Note: This is not medical advice. Never take any herbal remedy without consulting a qualified medical herbalist first.

My latest book, The Emerald Slippers of Oz features a unique plant known as Kudzu, which has medicinal value in treating alchoholism and hangovers, though not in Oz. In Oz, they serve to capture a villain.

I belive solomon's seal helps bring out one's natural beauty, perhaps stagnated or disconnected from the mind by past trauma. I am using it to help 'connect my brain to my mouth' if that makes any sense. < 3