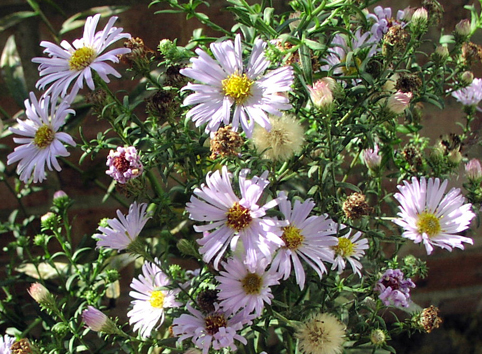 Michaelmas, the feast of Saint Michael the Archangel, takes place on 29 September. This festival - an important one in the Christian calendar - falls a few days after the autumn equinox, which pagans celebrate on 22 September, and has similar themes. It is celebrated as the end of the harvest, the start of autumn and the time when the days became noticeably shorter.

What I thought I'd write as Michaelmas approaches is Michaelmas daisies. These wildflowers bloom profusely at this time of year. Although many gardeners hate them because they do tend to choke up the flower beds - I like them and let a patch grow in a damp and shady spot next to a wall where other plants wither or get eaten by slugs. They offer a bit of much-needed colour as the days get gloomy, and the bees and butterflies seem to like them too.

According to Discovering the Folklore of Plants,

by Mary Baker, there is a traditional rhyme about Michaelmas daisies that explains their connection with the festival:


The Michaelmas Daisy, among dead weeds,
Bloom for St Michael's valorous deeds.
And seems the last of flowers that stood,
Till the feast of St. Simon and St. Jude.

St Michael, the chief of the archangels, is famous for several "valorous deeds", including dragon-slaying and kicking Lucifer out of heaven, which he is supposed to have done on St Michael's day. Another plant-related bit of folklore is that Lucifer was said to have landed on earth in a blackberry bush. He was so annoyed, he pissed on the blackberries and cursed them to always be inedible after September 28.

The Feast of St. Simon and Jude, by the way, is 28 October - close to Hallowe'en. It shows that Michaelmas daisies do bloom for a long while late in the year, much longer than blackberries are in fruit.

In ceremonial magic, the Archangel Michael is called upon for protection. He represents the element of fire and is one of the guardians of the quarters of the circle, along with Raphael, Gabriel and Uriel. I would say this would be a perfect time to do a little angelic magic, if you are so inclined, and that Michaelmas daisies would be the perfect flowers to put on an altar at this time of year too.