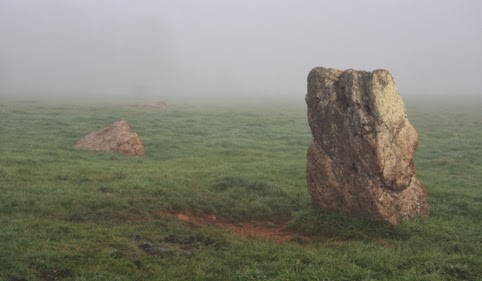 This summer I visited Stanton Drew stone circles - and I was absolutely captivated by the magical and ancient sacred megalithic site on the bank of the River Chew, in Somerset.

I earlier blogged about my visit - and also won a photo competition with one of my pictures of the stones on a misty morning. But I didn't really know much about the rites or rituals the stones were built to honour by our neolithic ancestors, or what uses they have been put to since.

However, Druid's Arms pub in Stanton Drew had on its wall an advert for a book called The Sacred Stone Circles of Stanton Drew.

I decided it was something I really needed to read, so I contacted the publisher, Skylight Press.

Skylight Press says a little about the stone circle on its website: "The village of Stanton Drew in north Somerset is host to a remarkable group of ancient monuments which together comprise the third largest collection of standing stones in England. The Great Circle, the largest of its three stone circles, encloses an area of 2,000 square metres, exceeding the dimensions of Stonehenge. It was once approached by an avenue of standing stones, now lost. A smaller Southwest circle is aligned to The Quoit and The Cove nearby."

It goes on to explain the author's credentials, and this is not the first thing he has written about Stanton Drew: "Gordon Strong, author of Stanton Drew: and Its Ancient Stone Circles

and a regular lecturer on the subject, has spent many years exploring this fascinating site on multiple levels."

But what about the book itself?  I found it fascinating reading - an in-depth look at pretty much all the theories about the stone circle, from science and archaeology to the spiritual and esoteric.

Gordon Strong starts with the basics - a chapter entitled "What are Stone Circles" -  and goes on to discuss the archaeological details of the stone circles at Stanton Drew. It appears archaeologists have found evidence that the huge ring of stones once contained concentric rings of wooden posts - a woodhenge. This may even have included a covered area that could have been used as a temple.

Various people have surveyed the site from the 18th century onwards - these have included scientific studies as well as investigations by dowsers and mediums.  The book looks at solar, lunar and planetary alignments that have been calculated. The most popular of these is that the stones indicate the midwinter sunset and the midsummer sunrise, although another theory is that Stanton Drew follows the cycle of the planet Venus.

There are also many tales surrounding Stanton Drew, including local folklore that the stones are a wedding party who were cursed after their celebrations went past midnight on Saturday and into Sunday morning. There are myths relating to gods and goddesses and tales of King Arthur and the magician Merlin connected to the area.

Many stone circles are considered to be connected to lines of earth energy that cover the planet, and Stanton Drew is no exception. Another idea is that the stone circle was a place where ancient shamans could more easily travel to other realms, perhaps helped by the quartz crystals within the stones themselves, or by the magic mushrooms that grow profusely in the surrounding countryside.

Every theory is covered in an open minded manner.Whether you believe them or not is up to you, but anyone who is interested in stone circles or who is planning a visit to Stanton Drew will find something to pique their curiosity, I am sure.

Gordon Strong ends his book by looking at how the stone circle is still used today for seasonal rituals and celebrations by druids and other pagans. I absolutely agree with him that Stanton Drew is a place with a magical atmosphere. Do visit if you get a chance - and read this book before you go.

The photo at the top is one I took at the stone circle, the other picture shows the front of the book.