Many an adventure tale starts with being given a map. That is how this story begins too – but it is no work of fiction.

Back in the depths of winter, when I was thinking about places I wanted to explore in the coming year, a friend gave me a map of the stone circles at Stanton Drew. It was a much-faded black-and-white photocopy of a map from a very old leaflet about the prehistoric site. This showed not one stone circle, but three. These, as well as a set of stones known as The Cove, all lay on one side of the River Chew, in Somerset, while an outlying quoit could be found on the other bank of the river.

What made me want to see Stanton Drew stone circles myself was the fact that it is the third largest collection of standing stones in England. Yet, as I learnt when I visited during the glorious Indian Summer weather of early September last week, Stanton Drew languishes in obscurity compared with Avebury, which is England’s second largest megalithic complex after the world-renowned Stonehenge.

Pay a visit to either Avebury or Stonehenge and you will find them crowded with visitors. From tourists who feel no holiday in England, or at least the West Country, is complete without a trip to a famous stone circle to pagans who believe a pilgrimage to these sacred sites must be done at least once in a lifetime, Avebury and Stonehenge are on the must-see list. Yet stop any of these tourists or pagans and ask them if they have been to Stanton Drew and the answer is likely to be no – if they have heard of the place at all.

Even many of the people who live in the village of Stanton Drew seem remarkably uninterested and uninformed about their local stone age megaliths, apart from knowing the field where the main stone circle stands. Although the stones are managed by English Heritage, they lie on private farm land. There is a sign saying access is permitted from 9am until sunset each day and there is an honesty box on the gate with a suggestion that you drop in a pound to pay for your visit – a fair admittance charge I would say. In fact, the field contains two of Stanton Drew’s circles - the Great Circle, which is 113m in diameter, and the smaller North East Circle. It also contains the remains of an avenue of stones by which the small stone circle would have been approached in the distant past when Stanton Drew was a significant place of ritual and worship. (You can see a photo of the site at the top.)

Most people in the village also know that the three stones that make up The Cove can be found in the garden of the local pub – the appropriately named Druid’s Arms (one of the stones is pictured left). But even the barmaid at the Druid’s Arms couldn’t tell me where I could find the third stone circle. After ordering a pint of the local ale, I showed her my creased and faded map, which clearly included a South West Circle, some way apart from the Great Circle.

She shook her head. She had never heard of it before, let alone seen it, she said. It was a mystery.

By the time my beer was drunk and The Cove thoroughly explored, the sun was setting. The best course of action seemed to be to put my plans of exploration aside until morning and buy another drink. I decided to switch to cider.

This being Somerset, the home of English cider, I asked what local brews they had. The barmaid pointed to Thatcher’s Gold on tap. Now, I have nothing against Thatcher’s Gold and I do realise that it is produced in the county, but I was hoping to sample something I couldn’t easily buy in London, I explained to the barmaid. I asked if there was anything else available. She paused and glanced at the other people in the bar, the locals. There was a definite lull in the conversation and their eyes turned towards me. So I looked at them, then back at the barmaid.

Naturally, I asked to try it.

The barmaid produced, from below the counter, a battered plastic container of cloudy yellow liquid and poured a small amount into a glass. I sipped. I’ve had scrumpy before. It isn’t rough at all. In fact it tastes extremely smooth. Hardly alcoholic really. This is deceptive, however. Although it tastes much like plain apple juice, real scrumpy will get you drunk in no time and I am pretty sure its name refers entirely to how you feel the morning after.

“Very nice,” I said, and ordered a glass. There was the perceptible sigh of relief from the barmaid and around me the locals picked up their conversations again. I sort of felt as though I had passed some kind of test, though a test of what I wasn’t entirely sure...

The next morning, over the Full English and pot of tea that is the standard cure for a hangover, I asked the owner of the B and B I was staying at if she knew the location of the mysterious South West Circle. At first, she seemed just as baffled as the barmaid the night before and said she had never heard of it. But, after a while – and much peering at my map – said she thought that if it really existed I might be able to catch a glimpse of it over the wall at the back of the graveyard behind the village church.

So, that was where I headed after packing my bags and paying my bill. The churchyard was beautiful and peaceful in the early autumn sunlight, full of old weatherworn grave markers and surrounded by a lichen-encrusted stone wall. But, beyond it, where the South West Circle might lie, was out of view. All I could see was a huge and overgrown hedge of thorns and brambles that could just as easily hide Sleeping Beauty’s castle as a lost stone circle. I needed to find another route if I wasn’t to give up my quest there and then.

Wandering down the country lane beside the church, I spotted a faded and half-broken sign marking a footpath that led towards a farm. It seemed as though it might run in the right direction so I followed it. I could see the high and overgrown hedge to my right. At the edge of the footpath I was following ran an electric fence, and the ground between the fence and the high hedge was dense with nettles and thistles. I became more and more convinced that that hedge surrounded the secret circle, but clearly this was private land and the owner of that land – and the circle itself - did not want trespassers.

What was I to do?

At last I spotted a slight gap in the high hedge where a small kissing gate must once have allowed access to that enclosure, although it was now almost completely obscured in the thorns and brambles.

I looked around. No sign of anyone else in the area. No angry farmer heading my way brandishing a shotgun loaded with rock salt – the traditional way they deal with trespassers in these parts, or so I have heard. Taking a deep breath, I crawled under the electric fence, waded as quickly as possible through the knee-high nettles and squeezed through the kissing gate in the hedge, ignoring the thorns scratching my arms.

And there it was, hedged round so it could not be seen from outside, lying in long grass, were the large stones of the South West Circle. I quickly took the photo you see below and made a hasty retreat – not only from the private field, but from the village too. I might have passed the Cider Test at the Druid’s Arms the night before, but nevertheless I wasn’t sure what the locals might do to an outsider who had penetrated the secret of the South West Circle of Stanton Drew.

I still don’t know what rites or rituals the stones were built to honour – or what uses they have been put to since. The English Heritage website gives few details and even my photocopied leaflet said the origins of the site are surrounded in mystery. I have seen that a book was published in 2012 called The Sacred Stone Circles of Stanton Drew,

which I intend to read to learn more. I might have seen all the circles, but I know the story won’t be ending there. 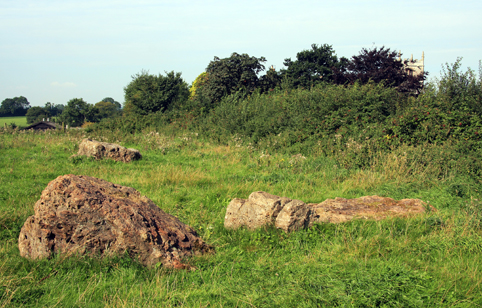 Oooh, I knew of Stanton Drew but only as one circle - fascinated to learn of the others! Am also reminded of my favourite set of children's books, Susan Cooper's 'The Dark Is Rising' series, in which the two main families are the Stantons and the Drews.

I haven't read those books, they sound great!

To be honest, the only time I ever visited Stanton Drew was really rather surreal. For a start, it was as if the locals had an early warning system on the surrounding lanes, for clearly the call had gone out: "Yorkshireman incoming! Everybody hide!".

Hide they did, leaving only cows to greet me, and noble animals though they are, cows are incrutable on the matter of megalithics. I found all three circles without difficulty, though as I recall I didn't locate the car park for the site. I also found the cove, but during the whole time I was there met not a soul in the place.

I didn't see many locals about when I was there either - except in the Druid's Arms pub in the evening. I found the car park without much difficulty as there was a sign right by it and it was near the bottom gate to the field that the Great Circle is in. It is a very small car park - just room for about four cars.