An Autumn Leaf and the King of the Trees 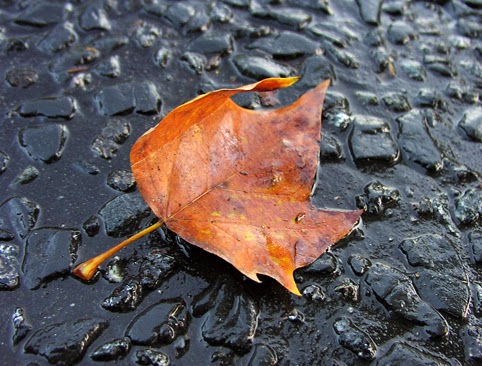 I love the autumn, when the leaves turn gold and red and brown and start to fall. I love the way they cover the grey streets with a blanket of brightness.

Leaves were fluttering to the ground in the early evening in a car park near where I am working. The drab Tarmac and railings seemed transformed by nature into a magical landscape. It made me want to delay my commute home, get out my camera and record the beauty of the scene.

And that night I dreamt I met the King of the Trees. At first I thought he was wearing a billowing cloak of autumn leaves, but then I realised he was entirely made of leaves. Not a Green Man but a man all gold and brown and crimson, from his face to his feet.

When he spoke, his voice was like the rustling of the leaves in the autumn winds, and this is what he said: “You call the Oak King and the Holly King two, and set them at war, but I am both and all the changing seasons. There is no conflict.”

Then the wind gusted and the leaves swirled and he was gone, while I drifted further into slumber.

But here is a photo I took of a leaf on the ground in a grey autumn car park, one little reminder of a moment of magic.

Excellent! Enjoyed that very much.