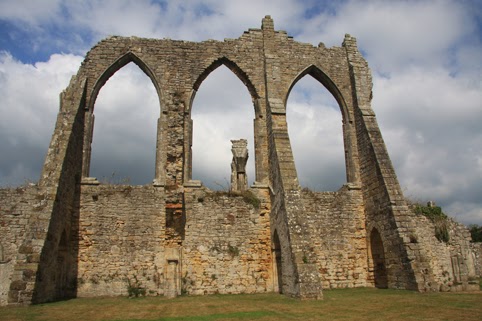 Bayham Abbey certainly seemed the kind of place that should have its share of ghosts, or so I thought when I visited the gothic ruins earlier this autumn. Reading a new book by folklorist Neil Arnold, Haunted Tunbridge Wells,

I learnt that had I stayed there after dark I might indeed have encountered the spectres of monks who once dwelt there.

Neil says 12 monks in white robes have been seen at dusk by several witnesses, including members of the Ghost Club: "...their presence is made known by the ringing of their bells and their eerie chants. The procession has been seen to travel around the cloisters and the old ruins of the church, moving in pairs as eerie mists that fade into the haze of dusk."

Bayham Abbey is about six miles by road from the town of Royal Tunbridge Wells - haunted roads at that. A headless horseman and phantom cars have been seen by several travellers in the area - including a mysterious white Bentley that drifts through the streets.

The town - granted the title "Royal" by King Edward VII in 1909 - is supposedly one of the most haunted places in Kent. According to Neil: "I think it’s fair to say that the Pantiles and its surrounding areas are riddled with ghosts."

The Pantiles is a Georgian colonnade that leads from the well that gave Tunbridge Wells its name following the discovery of a chalybeate spring in the early 17th century. Historically a famous spa town much like Bath, Royal Tunbridge Wells is now a popular tourist attraction and the Pantiles is a place most tourists will explore. It includes a variety of specialist shops, art galleries, cafés, restaurants and bars - many of which harbour ghosts.

The ghosts of the Pantiles are so well known and numerous that there are many ghost walks you can sign up for if you visit the town, but if you prefer to explore by yourself then Haunted Tunbridge Wells can lead you to shops, hotels, cafes and pubs where you might just glimpse the ghosts of women waiting for lovers who will never return, poltergeists who move furniture or displace items of clothing and the spectres of former residents who do not seem to realise their time has passed. And talking of time, one woman who visited Tunbridge Wells even experienced a strange time slip when she she walked down a side street into a busy cafe that she later learnt had ceased to exist around 50 years earlier.

Publisher The History Press says on its website: "Tunbridge Wells is a town steeped in history and history, of course, means ghost stories. Join Neil Arnold for a unique and spine-tingling excursion into the darkest corners and eeriest locations of this old town. Be chilled by all manner of sinister tales and things that do more than just bump in the night. Stroll through a plethora of haunted shops, houses and ancient woodlands. After this creepy jaunt you’ll never see this delightful town in quite the same light, so grab your candle and hold your nerve..."

You can order Haunted Tunbridge Wells

The photo at the top shows Bayham Abbey Ruins

Many thanks for mentioning my book, best wishes, Neil

I enjoyed it very much. Thanks for leaving a comment :)