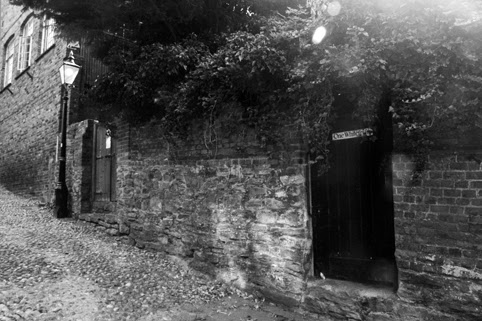 Here is a photograph I took of a haunted lane. It  is Turkey Cock Lane, in Rye, Sussex. The narrow, cobbled passageway in the historic Cinque Port has the kind of name that might make those with a prurient mind want to snigger, but its origins are sad rather than salacious.

The story, which I pieced together from books including Portrait of Sussex

by Cecile Woodford and Ghost Hunter Walks in Sussex

by Rupert Mathews, is a tragic tale of doomed love. The lane once ran alongside a 14th century Augustinian Friary. All monks and friars were, of course, under a vow of chastity - with dire consequences should they break their oath. But one of the friars, known as Cantator because of his divine singing voice, fell in love with a girl called Amanda who lived in the house on the other side of the friary wall - and she fell in love with him, too.

He would sing from the friary gardens, and she would listen to his lovely voice. Occasionally, they would have a chance for a whispered and clandestine conversation. Eventually they planned to elope across the sea to France so that they could be together forever. But their secret was discovered before they could escape.

Cantator's cruel punishment was to be bricked up in the friary wall and left there to die a horrible death. Yet after his entombment he continued to sing songs of love to his Amanda, so she could hear his beautiful voice to the end. But, as thirst and starvation overtook him, his voice became cracked and hoarse. They say towards the end he went insane, and the sounds he emitted were like the gobbling of a turkey. Yet even his death was not the last that was heard of Cantator. A cowled ghost has often been seen on the site of the friary gardens - and so many people have heard a sound like that of a gobbling turkey cock that the lane was given the name it holds today.

On each Pagan Eye post, I show a photo that I find interesting, with a few words about it. The pictures can be a seasonal image, a pagan site, an event, or something of historic interest. If you want to send me a photo for a Pagan Eye post, please email it to badwitch1234@gmail.com Let me know what the photo shows and whether you want your name mentioned or not. For copyright reasons, the photo must be one you have taken yourself and you must confirm that you are submitting it for A Bad Witch's Blog.