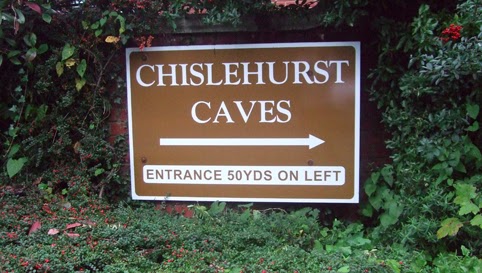 I do love ghost stories in the season of Halloween - or Samhain as us witches like to call it - and I've just finished reading a book called Haunted Bromley.

It is all about weirdness in a borough that straddles the borders of Kent and South London and is by folklorist Neil Arnold.

Now, Bromley has the usual collection of haunted homes and pub poltergeists, but what makes it rather unusual is that the area contains miles and miles of ancient mine workings.

Called Chislehurst Caves, the mines really are rather ancient. Some people have seen the ghost of a Roman centurion wandering around the tunnels, forever searching for his lost legion. They were probably used even before the Romans came to Britain, although a tale that druids conducted sacrifices in underground temples there is almost certainly untrue.

Although the caves were originally dug as mines, over the centuries they have been put into service as a smugglers' hideaway, a refuge in times of war, a venue for rock concerts and as a mushroom farm. For a few decades they have even been used as an atmospheric setting for fantasy roleplaying games. Like in Tolkien's Mines of Moria, you might really bump into an army of orcs there if you stray off the path on a guided tour. But before you dismiss such an encounter as being just people in rubber masks, read on...

Long before the roleplayers came to the caves, subterranean explorers claim to have been frightened by sightings of a devilish spectre with cloven hooves, some have seen a cloaked figure exuding an air of evil, while others have seen a ferocious looking wolf-like monster loping in the shadows cast by their torches in the dark tunnels. And whether you could encounter something as frightening as the terrible Balrog is a matter of speculation.

According to Haunted Bromley, "One of the creepiest locations within the belly of the caves is the reputedly haunted pool... It is around this section of the caves that the most paranormal activity is said to take place."

The book goes on to explain that two centuries ago, a woman was said to have been murdered there by her husband and her body thrown into the water, weighted with stones. Whether this is true or not, and whether it is the origins of the manifestations that have later taken place there, or whether the black pool holds some more ancient malevolent horror is a matter of speculation.

In the 1950s a policeman took a £5 challenge to stay the night in the caves and claimed to have been frightened by a menacing apparition. In the 1980s, two tour guides took up the challenge, but had to be rescued in a state of terror and one of the men needed to be rushed to hospital having suffered an inexplicable fit.

The £5 reward for staying the night in the caves is no longer offered due to health and safety concerns, so perhaps the mystery of Chislehurst Caves' most scary apparition will never be fully solved. You can still take a tour around the caves during the daytime though. If you do, I'd recommend not dropping any stones into that ominous pool to see how deep it is - you might not like what you stir up.

Only one long chapter of Haunted Bromley is about the caves, and publisher The History Press mentions some of the borough's other ghostly goings-on. "Folklorist Neil Arnold peeks into the darkest corners of the district in search of phantom highwaymen, troublesome poltergeists, creepy creatures and haunted houses, as well as investigating Bromley's most ghost-infested areas such as Biggin Hill, with its wartime spirits," it says on its website.

Haunted Bromley is part of a series of books published by The History Press covering ghost stories from around England. I'll be reviewing another on the series - Haunted Tunbridge Wells - before Halloween.

You can order Haunted Bromley

I bet it's not really health and safety reasons that mean the Caves aren't open at night. It can't be any less safe than during daylight hours.