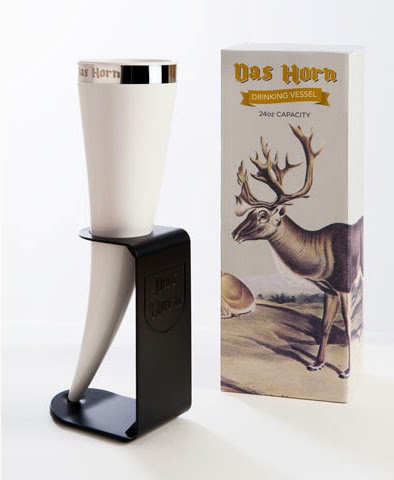 Well, here is a press release I was sent that I couldn't resist sharing in full:

There's nothing better after a hard day's pilfering, plundering, and pillaging than an ice cold brewski. But not just any old tankard, chalice or pint glass will suffice. Great Odin's Raven, NO! So raise a toast to the 'Allfather' and hail your 1000th Twitter follower with Das Horn – the beautifully designed drinking horn for the iPod generation.

The shape of this handsome vessel has been perfectly refined for both comfort and volume, easily holding around 1.2 pints - although it's not recommended for hot drinks. Short of arriving in a longboat it’s the ultimate way to establish who’s boss at any shindig (after all, only peasants would drink from a mug).

Of course, the downside of drinking out of a horn is that it’s not the easiest thing to put down mid-ale. And today’s beards just aren’t thick enough to carry them. Well fret ye not. Das Horn comes with a handy lanyard - for carrying around the neck - and a suitably stylish black metal display stand; ready for a glorious return from looting the fridge.

OMG! Have to get one for the hubby!