A Yule of Woes: Storms, Floods, Ilness and Loss 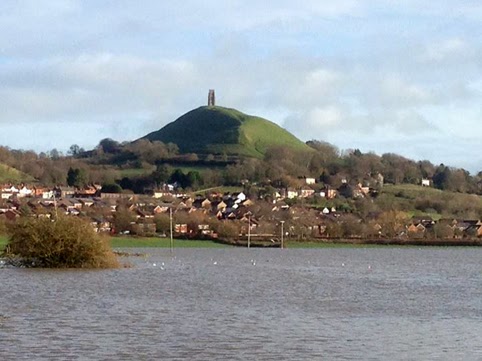 You might have noticed I've not been blogging much for the past week. I meant to but, like many people, I've had rather a rough Yule. Shortly before the holidays I cracked a tooth and got a gum infection, meaning I needed an emergency dental appointment. The temporary filling I was given fell out over the Christmas break. I had a further emergency trip to the dentist and am looking forward to having the tooth removed completely on Friday. Added to that, I caught the horrid chesty cold that's been doing the rounds. It all meant I didn't feel like doing very much except resting in bed while others were partying and having fun.

But I know I've had a far better holiday season than many. That photograph, which makes Glastonbury Tor look so much like the romantic ancient Isle of Avalon surrounded by a lake of water, actually shows rising flood water that caused misery all over the country on top of damage caused by the December storms. People have suffered power failures, meaning they couldn't heat their homes let alone cook their turkeys - some have even lost their homes.

I've heard plenty more tales of woe. There seems to be more than the usual amount of illness around too, with people suffering far worse than a broken tooth and a bad cold. One of my friends woke up on Boxing Day morning to find her cat had passed away in the night.

If you have been having a tough time lately, I do hope things get better for you soon. Things always seem worse when the nights are long and the days are cold.

When I was lying in bed during the worst moment of my cold and tooth problems, feeling feverish and lacking the strength to even get up to make a cup of tea, I looked out of the window and saw the sun shining brightly in a clear, blue sky. I could feel the warmth of the sun's rays on my face. It got so bright I had to close my eyes, yet through my eyelids I could still see the brightness and feel the warmth continuing to intensify. It felt like energy flowing into my body, giving me hope and comfort - and making me think of an old punk song by the Stranglers, Always the Sun.

Maybe we don't always get what we want for Christmas. Sometimes life just gives us a poor run of luck. However good we might be at divination, we can never tell for certain what the future holds either. But even in the darkest times it can often be possible to find little things that cheer us up like a sudden ray of sunshine on a dark day.

And with the Winter Solstice behind us, and the new year about to start, there is one thing we can be certain of, that those rays of sunshine will get longer and brighter and lead us out of winter into spring.

The photo of Glastonbury surrounded by flood water was taken by Dave Phelan who said I could use it under Creative Commons (http://creativecommons.org/licenses/by-sa/3.0/)
Posted by Badwitch at 08:00

I am sorry the end of the year has been hard on you and others. I saw in the news about the storms hitting the UK and hope you do not have winters like the last few. Here it has been Jan/Feb cold from early Dec with a few snows already and now raining. I live along a steep mountain stream that drains about 5 sq miles of mountain so it comes up fast and i rely on my cellar sump pump and when the power goes off my portable generator. Did you notice there is a new moon on Jan 1 so the bad of the old year is burning out and can all be dumped into it then magick restarted with new moon, though my teacher and initiator told us to not attempt much magick between Yule and Candlemas as it is a dead time. I go for back surgery Monday so it will be a painful rehab, but my departed teachers have appeared to me in dreams and even in my bedroom, and i am not even that psychic. She was an AmerIndian type healer and he was a medical doctor so i asked them for help. I won't see your response here since it wont feed into my WP reader, so if you post one copy it into an email to me please. leeshawus@embarqmail.com BB

Hope things are improving for you. Sending you some good vibrations...:)

Thank you all very much for the love, hopes and good vibrations.

Blausternschlonge - The area you live in sounds spectacular! I hope you avoid the risk of your cellar flooding. Thanks for pointing out that January 1 is a new moon and the perfect time for a new start. My coven doesn't usually meet between Yule and Candlemas and that ties in with what your teacher said. Good luck with your back surgery - is that today or next Monday? I hope all goes well for you and recovery as quickly as possible. BB Lucya

Hope you heal soonest! A bad tooth is a horrid thing :( We have first a stomach virus, now a head cold making the rounds here. No floods, though, (my heart hurts listening to the news reports)just changing weather making everyone's sinus' hurt.