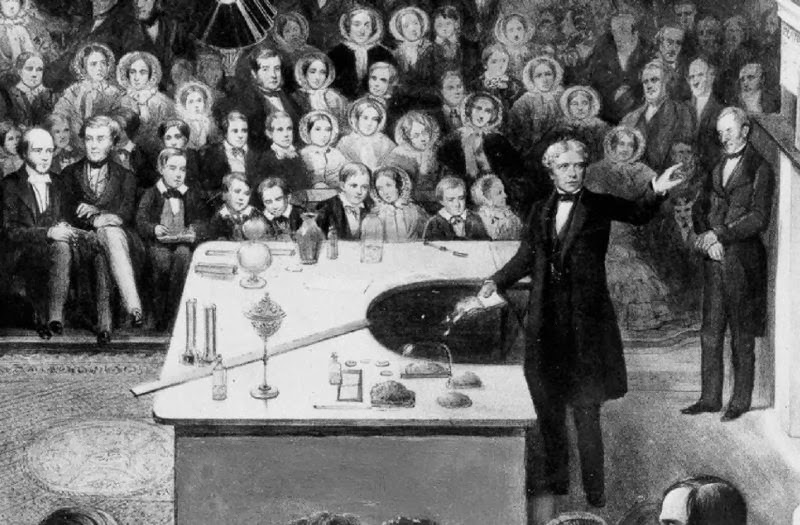 Here's another Yuletide ghost story - or possibly a tale of time travel - that I learnt about when I was on a ghost walk in London on Friday 13 earlier this month.

The Royal Institution, London's illustrious scientific organisation, is said to be haunted by the ghost of chemist and physicist Michael Faraday, who started the famous Christmas lectures in 1827. These lectures, that take place every year in December, are put on with the purpose of inspiring the public to learn more about science. For many decades they have also been broadcast on the BBC in the days between Christmas and New Year. One person who, it is said, has never missed a lecture in the two centuries since they started is Michael Faraday himself.

Apparently, Michael Faraday is usually only seen by the scientists actually giving the talks, and sometimes whispers words of encouragement to them as they demonstrate their experiments in front of the audience. So, does his ghost really haunt the lecture theatre, did Michael Faraday somehow learn a trick of time travel and use it to discover what his successors would have to say - and give them a little spiritual support - or is there some other rational, scientific explanation?

This year's Royal Institution Christmas Lecture series is called Life Fantastic and is on the subject of life on Earth, from single cell organisms to mammals. It will be presented by Dr Alison Woollard and you can watch the lectures on TV. The first is due to be shown at 8pm on Saturday 28 December 2013, on BBC Four. Look out for the ghost.

The picture shows a lithograph of Michael Faraday delivering a Christmas lecture at the Royal Institution by Alexander Blaikley (1816 - 1903) and is reproduced from the Wikimedia Commons.