What are Your Plans for the Winter Solstice?

Tomorrow, 21 December, is the Winter Solstice and the good news is it takes place on a Saturday, so no need to book time off work to do what you want to celebrate the midwinter festival. The precise time of the solstice - meaning the moment the sun appears to stand still between the shortening of days and the lengthening of days - is 5.11pm in the UK.

Of course, many pagans conduct their rituals to honour the sun's return at dawn or sunset on the Midwinter Solstice rather than the exact time it occurs. If that's your plan, then dawn is a few minutes after 8am and sunset is a few minutes before 4pm tomorrow.

Back at the start of the year, visiting Stonehenge for either the Summer Solstice or Winter Solstice was on my list of New Year Resolutions. That didn't work out in June and, considering the high feelings over the new visitor centre at the famous stone circle, I'm not sure Stonehenge is really where I want to be this festival time. When I visited Stonehenge on my way home from Stanton Drew Stone Circle in the summer I did see the visitor centre under construction (photograph at the bottom). There were also plenty of other signs of other controversial construction work being done around the site - such as the JCB in the photo at the top.

My own plans for tomorrow afternoon are to be cosily indoors with a big crowd of pagan friends for fun and feasting, followed by a small private Yule ritual after the kids have gone to bed.

But what are you doing for the Winter Solstice? Do leave a comment - or even email me a photo afterwards if you would like me to post it on A Bad Witch's Blog. The email address is badwitch1234@gmail.com

Oh and if you are heading to Stonehenge, there is managed open access on 21 December with a sunrise celebration at 8.09am. Entry is allowed from 7.30am to 9am. All vehicles must leave the area by 9.30am. You can also see a list of some other Winter Solstice rites taking place in London and elsewhere in southern England on my events post yesterday. 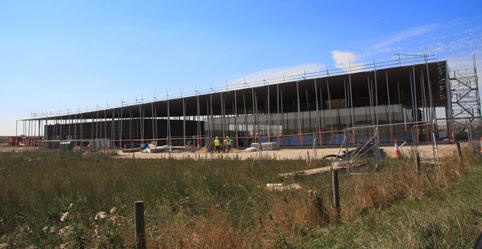