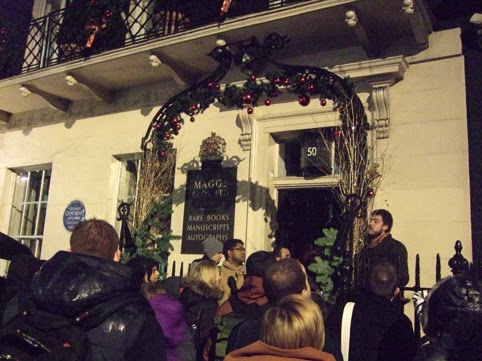 Want to hear a ghost story? One set not only on a Friday 13, but on a dark and stormy night before Christmas? Well, the long evenings before Yule are the traditional time for ghost stories, so here is mine.

Last Friday night, which was a Friday 13, I set off on a ghost walk in London with a few friends. If you are going to do a ghost walk, you might as well pick a suitable occasion and Friday 13 seemed as suitable as you could get.

In the past I would have said that one shouldn’t really expect to see a ghost when one is a on a ghost walk. But, as I have blogged about before, when I went on a ghost tour of haunted Michelham Priory the person I was with did get rather unnerved by seeing a man who wasn’t there. After that, I’ve kept an open mind.

The ghost walk was run by Great British Tours. It promised a two-and-a-half hour itinerary taking in some of London’s spookiest locations - including the house that became known as "The Most Haunted House in London"; partly due to Peter Underwood's description of it in his book Haunted London.

The building is at 50 Berkeley Square. I’d heard about it before. I’ve even mentioned it in an earlier blog post about the best places in London to see a ghost. I’d never actually seen anything even possibly supernatural there myself though – until last Friday.

Here is a rough outline of 50 Berkeley Square’s dark past, loosely based on the excellent description given by Friday night’s tour guide, Tom:

The house is known to have many ghosts, including those of a child who was murdered by his nanny and a girl who jumped to her death to escape abuse. But the scariest room in the house is in the attic. A long time ago a maidservant was given the attic room as her bedroom. On her first night there, the family were awoken at midnight to the sounds of her screaming. They rushed upstairs to find her frozen in fright. All she would say – and all she would ever say again - was, “It was horrible!” Completely insane, she was incarcerated in a lunatic asylum.

The next person to stay in the room was a young man. He knew the reputation that the room was haunted, but was armed with a pistol and was given a bell to ring in case there was trouble. At midnight the family were awoken by the bell ringing furiously. They rushed upstairs to find the man dead of fright. He had fired his pistol, but no bullet was found anywhere in the room.

One person did manage to survive a night in the attic unscathed. He was an experienced ghost hunter. Arming himself with a pair of blunderbusses loaded with silver shot, he claimed he would be able to rid the house of its horror. At midnight, again, the rest of the inhabitants were awoken by the sound of the blunderbusses being fired and rushed upstairs. The ghost hunter was standing unharmed, with smoking guns, saying he had shot something dark that started to materialise in the corner of the room. No sign could be seen of what he had fired at – but neither was there sign of blunderbuss damage to the walls. Whatever he had let loose at had taken the silver shot with it.

Despite the ghost hunter boasting he had killed the apparition, no one else wanted to risk staying in the attic room or, indeed, the house. Fifty Berkeley Square was soon abandoned and left empty for years – until one night when two drunken sailors decided it looked like a good place to break into to sleep for the night. They foolishly chose to bed down in the attic room, but were awoken by something terrible. The surviving sailor – who managed to rush out of the room, down the stairs and out of the house to find a policeman – could only describe what he saw by saying, “It was horrible!”. The other sailor fared far worse. His mangled corpse was found impaled on the railings below the attic window, a look of terror on his dead face.

Nowadays the building is premises of Maggs antiquarian bookshop. No one lives there and it is unoccupied and locked at night. No one uses the attic room. The ghost walk, led by Tom, did not take us inside the building. We gathered on the steps outside to hear the tale and were then encouraged to cross the road to take photos of the building. Some people, Tom told us, have occasionally captured the image of a face looking out of one of the attic windows.

I saw no face, but examining the pictures later, I saw in one of them a strange light inside the attic room. The light was not there in an almost identical picture taken a few moments before. You can see both pictures down the side of this page, and the strange light, in the top right window, on only the bottom photo. Neither have been artificially altered, I assure you.

What the light was, I have no idea. The house was unoccupied after all, and the attic room is never used. However, doing a bit more research on 50 Berkeley Square at home, I read in the book Walking Haunted London: 25 Original Walks Exploring London's Ghostly Past

that sometimes: “Passers-by were startled by strange lights that flashed in the windows.”

I’d say I was startled, too.