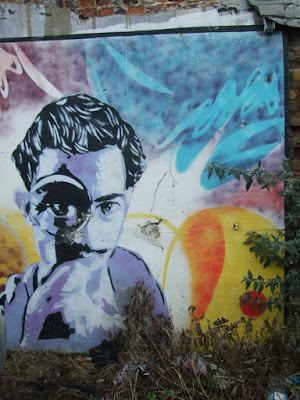 I've been posting photos of London street art over the pagan Wheel of the Year festivals this year, including Ostara, Beltane, the Summer Solstice and Lammas. The images I have chosen have been ones that reflected some aspects of the meaning of each season.

We are approaching the Autumn Equinox, which falls on Wednesday, 23 September, in 2015. Also called Mabon or the late harvest festival, it is celebrated when day and night are of equal length. It is a time of balance before the descent into the dark half of the year. Traditionally, it was also the time of year when farmers took stock of what they had harvested, and for us in the modern world it is a time to scrutinise what we have done over the year so far and consider what we want to take with us into the winter to come.

The street art that I photographed above has the suggestion of a yin-yang symbol, representing balance and harmony, but also the starting point for change. The man with the magnifying glass looks like a detective. To me that symbolises the need we all sometimes have to scrutinise our feelings, actions and thoughts - and to look for clues as to the best way to proceed when the solutions to our problems aren't obvious.

It also reminded me of the Sherlock Holmes Tarot, which I reviewed on my blog last year. I think I might get that out and do a reading for myself with it this Autumn Equinox.

I photographed the street art shown above in Hoxton, East London.