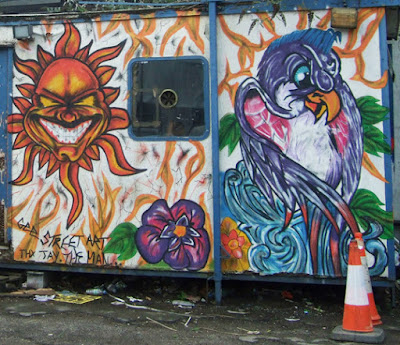 I've been posting photos of London street art over the various pagan festivals since last Yule, including for Earth Hour, Ostara, Beltane and the Summer Solstice.

This coming weekend is Lammas - the festival of the grain harvest. I couldn't find any street art that showed wheat and barley being gathered in - probably because those living in inner cities don't get to see much of that. However, I always feel that Lammas is also the festival of high summer. Although the longest day is behind us, this is often the hottest time of year and many of us are still looking forward to sunny holidays in the country or in foreign lands.

I hope this smiling sun and tropical bird capture a little of that, even though the photo was taken on a cold, damp day on a grey London street. If you want to see this picture or any of the other street art I have photographed, travel to Hoxton in the East End.