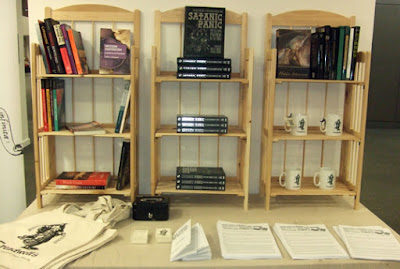 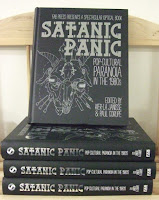 At the conference on the UK Satanic Abuse Scare: 25 Years On I bought a book from the Treadwell's stall, entitled Satanic Panic: Pop-Cultural Paranoia in the 1980s. I've just finished reading it - and I found it fascinating.

The blurb on the back cover explains what the Satanic Panic was:


"In the 1980s, it seemed impossible to escape Satan's supposed influence. Everywhere you turned, there were warnings about a widespread evil conspiracy to indoctrinate the vulnerable through the media they consumed. This percolating cultural hysteria, now known as the Satanic Panic, not only sought to convince us of devils lurking behind the dials of our TVs and radios and the hellfire that awaited on book and video store shelves, it also created its own fascinating cultural legacy of Satan-battling VHS tapes, audio cassettes and literature."

It goes on to say: "The widespread fear of a Satanic conspiracy was both illuminated and propagated through almost every pop culture pathway in the 1980s, from heavy metal music to Dungeons and Dragons role playing games." I can personally testify to prejudice against Dungeons and Dragons because during the 1980s I helped run a role playing games club  and I was constantly having to explain to concerned parents - and others - that playing games was not a fast path to corruption and damnation.

I was even once hauled in front of the management committee of the community centre we met in to answer to reports that members of the club had been seen conducting a black mass, including a sacrifice and ritual burning. Obviously these claims were completely untrue. Well, actually, the last part was sort of true. I had ritually burnt a book in the Gor fantasy series on the community centre barbecue, because I considered John Norman's writing to be horribly sexist. But we certainly weren't doing a black mass and all that was sacrificed was some pulp fiction.

But back to Satanic Panic: Pop-Cultural Paranoia in the 1980s, which is a collection of essays by 20 writers, covering role playing games, heavy metal music, comics, horror films, TV shows and home computers - and some pulp paperbacks that probably caused more problems than anything written by John Norman. It looks at the moral panic from all angles - including things like Christian bands who attempted to offer angelic metal music.

The book complements the conference on the UK Satanic Abuse Scare: 25 Years. It doesn't go into as much depth on issues affecting pagans in the UK at the time. Being mainly focused on America and popular culture, it explores the wider picture and the background to the moral panic that led to pagans being persecuted in a witch hunt only 25 years ago.

Satanic Panic: Pop-Cultural Paranoia in the 1980s can be ordered from Treadwell's and Amazon.

You can watch a video of the entire conference here: