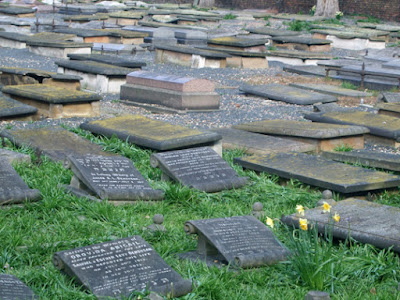 Before Samhain - or Halloween - for the past few years I've been posting a series of photos of London's burial grounds under the title London Necropolis - a Necropolis being a city of the dead. This October I'm continuing the thread. These photographs show Novo Cemetery, which is within the grounds of Queen Mary University of London, on Mile End Rd in East London.

I visited QMUL back in March for fascinating day of talks called Worlds of Witchcraft: Comparing African and European Histories of the Occult. I took the pictures of Novo Cemetery before the event in early spring - as you can tell by the daffodils growing on the graves.

The Novo Cemetery is Grade II listed on the Register of Historic Parks and Gardens because it is the last remaining bit of one of Britain's historic Jewish cemeteries. It was one of the first to be built after 1650s when Jews were - after centuries - finally allowed to openly practice their religion and burial rites in England. One of the interesting things about it is that it doesn't have upright memorials, which symbolises the fact that we are all equal in death. 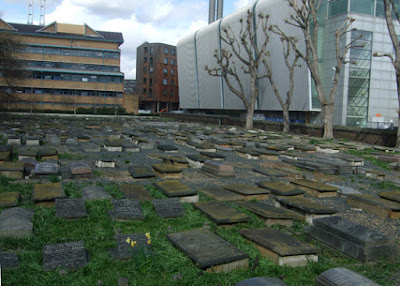 I was on the area a few weeks ago. I didn't get to see this cemetery. However there is a smaller Jewish burial ground around the corner to this next to the hospital. There's also another one up the road to my house near Victoria Park. Sadly both are fenced off and they can only be viewed through the railings.

Thanks for letting me know about them. The one at the university is right in the middle of the campus - you can walk into it, but I didn't when I was there. I just took the photos from the edge.

If you make it over for the Victor Wynd Museum again, I'll take you up to the Victoria Park cemetery.

Thanks! That would be great.

I managed to visit this cemetery yesterday on one of my walks. I've put a couple of photos on Facebook. It is in a really strange location, surrounded by all these modern campus buildings.

Thanks for giving me a heads up on it.

Yes, it is strange, I agree. An odd juxtaposition.