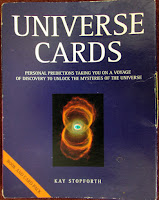 I found this unusual divination deck at a charity shop recently. Called Universe Cards, they show pictures taken by the Hubble Space Telescope and other pictures of stars and other astronomical phenomena.

They work as a divination deck with the idea that the natural phenomena of the universe act as a mirror for our own natures and destinies, which is sort of like the magical concept of “as above, so below”, from the Emerald Tablet of Hermes Trismegistus .

The deck was published in 1999, back when we were all facing the turn of the millennium and the deck has the subtitle Personal Predictions for the 21st Century. For each card, the book that comes with the boxed set offers the sciency background to the image, a divinatory interpretation and an activity.

You can use it as a simple fortune telling deck if you want to, but it is more aimed at offering guidance for personal development along our life’s path. The cards are ordered to represent a journey from earth to the edges of the universe – an exploration of the mysteries of the cosmos which reflects our own inner journey of self-discovery.

I’ve been using the deck myself quite a bit and found it insightful and helpful. I also took it along to a Samhain gathering where people of all ages drew a card, and all found it fascinating.

All in all, I am delighted with my find, which was considerably cheaper in the charity shop than I have seen it elsewhere.