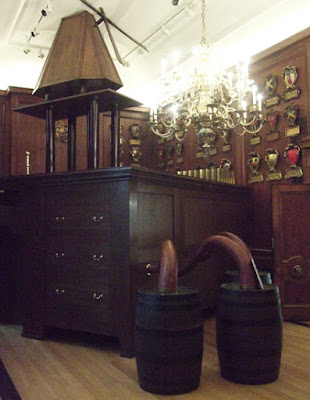 This amazing machine looks like something out of a steampunk fantasy, but is on display at Bethlem Museum of the Mind at the moment. It is an installation based on the Air Loom, which was detailed by James Tilly Matthews, a 19th century Bethlem patient who believed it was being used in secret to mind-control people in power.

I actually went to the museum because I wanted to see the Louis Wain exhibition before it closes. Although I very much enjoyed looking at the illustrations and paintings of cats that Louis Wain is famous for, I was so fascinated by the Air Loom that I decided to put a picture of that on my blog today instead of a Louis Wain cat, which had been my original idea.

The art installation, called The Air Loom: A Human Influencing Machine, is by Rod Dickinson and the museum website says:


This artwork is a materialisation of the paranoid delusion of James Tilly Matthews, a Bethlem patient of the late eighteenth and early nineteenth centuries.
Matthews believed that influencing machines were hidden close to the corridors of power and were being operated to devastating effect by a shady gang of French revolutionaries bent on plunging Europe into war. He was also convinced that one of these enormous machines had been placed in or near Bethlem Hospital with malign intent towards him.

There is also a book out called The Influencing Machine, by author Mike Jay, and the description of that says: "Here [Matthews] delusions are celebrated as the most complex and bizarre ever recorded and strangely many of the incredible events he claims to have been involved in are entirely true."

Bethlem Museum of the Mind is part of the Bethlem Royal Hospital and is at Monks Orchard Road, Beckenham, Kent BR3 3BX. It is open to the public for free from Wednesday to Saturday each week. The Air Loom is on display until February 25 and the Lou Wain exhibition runs until February 4.