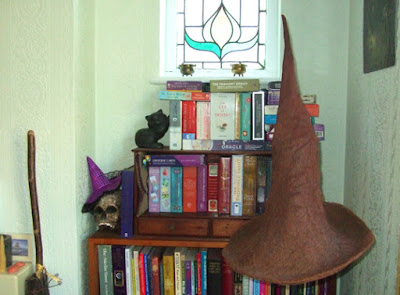 People who come into the room that contains all my witchcraft stuff for the first time often  comment about the big pointy hat on a tall stand. They usually then compare it with the sorting hat of Harry Potter fame.

Actually, I got that hat long before I ever read the Harry Potter books or saw the films. Although it looks like the classic witch's hat, I originally bought it to keep the sun off at a music festival with uncharacteristically hot weather for England.

The festival was Womad, which stands for World of Music and Dance. Many years ago, when I was considerably younger and into dancing all night long whenever I got the chance, I used to attend Womad with a group of friends every summer. 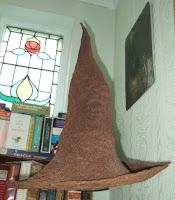 One year, those hats were the thing to buy. Lots of stalls were selling them and everyone seemed to be giving in to the trend and wearing one. They kept the sun off, but perhaps it helped that they were cheap too.

There was also something of a fashion for wearing fairy wings that year, so pretty much everyone - male and female - was wandering around the festival ground looking like some sort of pixie.

However, the hat is made of coconut fibre, which is pretty scratchy on bare skin. If you have ever sat on a coconut mat, which is made of the same stuff, you will know how that feels. So, after the festival, it has never been worn.

The stand it is on is a tall, wrought-iron candlestick meant to hold a large pillar candle. I bunged the hat over a candle that is still on the stand and it just stayed there.

You can probably also see a small purple witch's hat on the other side of the top photo. I bought that  last year from a pound shop before going to Witchfest. When I got it home and tried it on I realised it just didn't suit me.

Tidying up my room one day, I popped it on the plaster skull (which might later be the subject of another Tales from the Witch Room post). It looks better on the skull than it did on me.