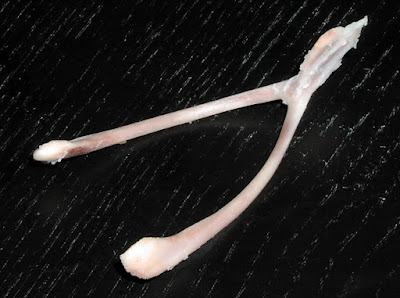 If you are having a roast chicken for your Sunday lunch it is traditional for two people to hold the wishbone between their little fingers and make a wish while snapping it. According to folklore, the one who gets the larger part after it breaks is set to have their dream come true. In Britain, the wishbone is sometimes called a “merrythought”. 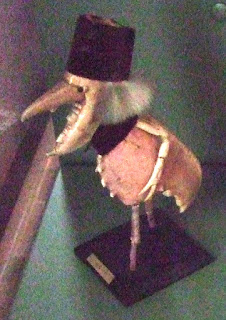 I learnt an interesting piece of doll-related trivia about that at the Museum of Childhood in Bethnal Green when I was researching for my book Pagan Portals – Poppets and Magical Dolls. The Merrythought toy company, which was founded in England in 1930, has a wishbone as its emblem.

Next to that curious bit of information, the Museum of Childhood also has some strange dolls made out of animal parts, including one fashioned from a lobster claw. That might seem a bit gruesome to our modern tastes, but at least it was using every part of the animal and letting nothing go to waste after a meal.

I will be doing a free launch event for my book Pagan Portals – Poppets and Magical Dolls at Treadwell’s Books in London on July 14. If you want to pop along, you can reserve a place here: https://www.treadwells-london.com/event/signing-poppets-and-magical-dolls/

You can also view the book at publisher Moon Books’ website: http://www.moon-books.net/books/pagan-portals-poppets-magical-dolls

The Museum of Childhood is at Cambridge Heath Rd, London E2 9PA. You can visit the website here: https://www.vam.ac.uk/moc/