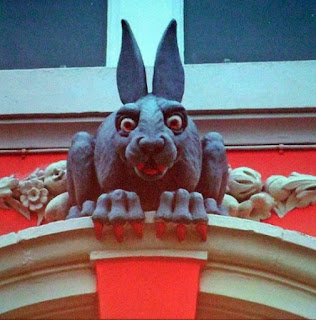 I had never heard about this strange northern sculpture before art historian Gail Nina Anderson spoke about it, but if I am ever in Newcastle I will now go and look.

Gail explained that the rabbit sits on top of a building doorway near Newcastle Cathedral. It wasn’t called a vampire rabbit until Goths gave it the name and started using it as a landmark, but it is now a well-known city feature and is lit at night.

However, no one seems to know why the rabbit is there or what it was originally mean to be. Although it is called a rabbit, it could actually be a hare. Gail said that even extensive research has only yielded some inconclusive ideas as to its origins.

Bunnies turn up frequently in statues, but have no overarching meaning. And why does this have an unpleasant expression?

The studio of engraver and natural history author Thomas Bewick (1753 – 1828 ) was once nearby. He engraved illustrations of animals, and created an edition of Aesop’s Fables. Hares and rabbits frequently appear in fables, so it could be a reference to him, but the connection is uncertain. Gail then looked at the symbolism and mythology of hares and rabbits in general.

In mythology, the Egyptian goddess Wenet is associated with hares. In Indian fables the hare is a trickster – and is the possible basis for Bugs Bunny. The Chinese see the shape of rabbit in the moon; he is making an elixir of immortality for the gods. In South America the rabbit is associated with fertility goddess.

In the west, we have the Easter Rabbit, but Gail could not find out if the building was officially opened at Easter. The Reverend Bede is buried in Durham Cathedral. He wrote about the mythical goddess Eostre, who is now venerated by some modern pagans as being connected to hares and rabbits. The Grimm Brothers also wrote about Eostre as a goddess of springtime. However, Bede doesn’t mention rabbits and Durham Cathedral isn’t exactly in Newcastle. Gail also found an early image of a goddess of the moon wearing rabbit ears.

According to legend, Boudicca released a hare from her skirt for divination about how her battle with the Romans would go. Rabbits are associated with fertility and sexual activity, but also with the Virgin Mary - because they were thought to be hermaphrodites so could produce a virgin birth.

There are children’s stories about rabbits, including Peter Rabbit, who is endearing but with a touch of the trickster. Lewis Carol wrote about a white rabbit, but his rabbit is dressed in clothes, takes a human role, and isn’t scary. The Mad March Hare is a bit closer, but not close enough.

Rabbits are, of course, traditionally associated with witches. Gail said: “Any small animal an old woman kept as a pet could be thought of as a familiar.”

There are many modern fictional and artistic representations of rabbits and hares, including the Masquerade book, which had clues to find a mystical golden hare. Scary rabbits also exist in modern films including Donny Darko and Wallace and Gromit: The Curse of the Were rabbit. There is even a children’s book and TV series called Bunnicula, about a vampire rabbit,

Gail asked local people what they knew about the rabbit. Some suggested it was a hidden insult, like London’s Cornhill Devils. One said the rabbit had once been painted green, while others said it was originally white and was known as the White Rabbit.

There were legend about its ears. One person said it was once a hare and had longer ears, but they were broken by a drunken lout or a cleaner, and replaced. In fact, Gail found photos from the 1970s in which it had shorter ears – although it was definitely white then. It still had long claws.

So, is the Vampire Rabbit of Newcastle just a bit of fun – an ornament put up as a whimsy, with no particular meaning?

If you have heard any stories about the Vampire Rabbit, do leave a comment.