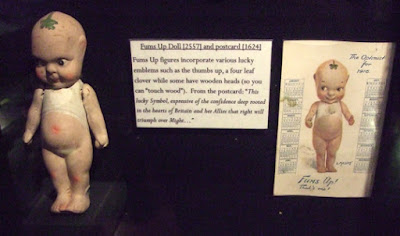 As it is Friday 13th with all its associations of bad luck, I thought I'd blog about a little doll that was thought to bring good luck back in the dark days of the First World War. 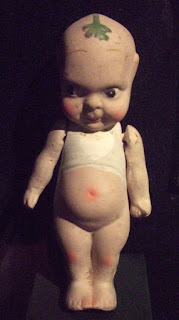 Girlfriends and family of soldiers going away to fight at the front frequently gave their loved ones tiny Fums Up! dolls as lucky charms. The doll and postcard in the photos are on display in the Museum of Witchcraft and Magic in Cornwall. Other examples were made of brass or silver. The MWM  sells modern Fums Up figures in pewter.

This Fums Up! has a lucky four-leaf clover symbol on its head. Others had thumbs up signs and some had wooden heads you could use to touch wood. There was a rhyme to boost the magic:


My head is made
Of wood most rare
My thumbs turn up
To touch me there.
To speed my feet
They’ve Cupid’s wings:
They’ll help true love
’Mongst other things.
Proverbial is
My power to bring
Good luck to you
In everything.
I’ll bring good luck
To all away –
Just send me to
A friend to-day.

Over the past week I've blogged about several magical dolls associated good luck, including mascots, Merrythoughts and fertility dolls. In the past I have also blogged about poppets used for curses, which were on display at the Museum of Witchcraft and Magic. I spent quite a bit of time at the museum when I was researching my book Pagan Portals – Poppets and Magical Dolls.

I will be doing a free launch event for Pagan Portals – Poppets and Magical Dolls at Treadwell’s Books in London tomorrow, July 14. If you want to pop along, you can reserve a place here: https://www.treadwells-london.com/event/signing-poppets-and-magical-dolls/

You can also view the book at publisher Moon Books’ website: https://www.johnhuntpublishing.com/moon-books/our-books/pagan-portals-poppets-magical-dolls