Predictions: Storms, a Blood Moon and a Long Journey 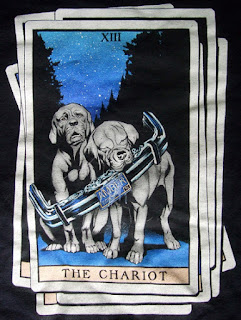 Tonight there's a Blood Moon. It is going to be the longest lunar eclipse of the century, or so the news stories I've been reading say. Some of them are also prophesying doom and gloom.

Earthquakes and lightning are predicted, much like the old Creedence Clearwater Revival song. Even the weather forecast says thunder storms are likely.

A friend who I respect as an astrologer has told me that, due to several planets going retrograde at the time, it is a bad night to be driving anywhere.

Despite all that, driving somewhere is what I'll be doing. I'll be heading off for a long road trip with a pair of witchy friends just as the moon turns blood red.

The photo on the right shows a design on a t-shirt for Ambercon - a roleplaying game convention based on the fantasy book Nine Princes in Amber, by Roger Zelazny. It is a book that is heavily based on tarot cards and is one I love. I'm not actually going to a games convention this weekend, I'm just off on a holiday with witchy friends. I came across the t-shirt when I was doing my packing and felt it aptly illustrated the potential for trouble on the way.

Am I a bit nervous?  Well, we'll be three witches in a car in a thunderstorm on the night of a lunar eclipse, setting off for a potentially 10-hour drive. I'm really looking forward to it!

Safe trip ,it sound like it's going to be fun.
Norm.