The Art of Magic: Museum of Witchcraft's Lost Objects 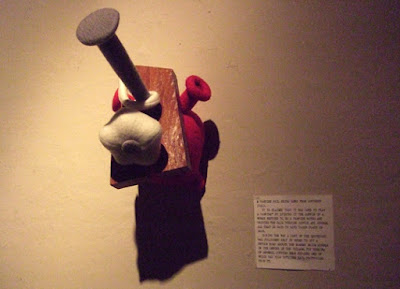 Last night I was at a performance to open a new exhibition called The Art of Magic, which is all about missing artifacts once housed in the archive of The Museum of Witchcraft and Magic.

The exhibition, currently on at the Horse Hospital in Bloomsbury, London, shows artist's re-imaginings of magical items that have been lost. All that remains of the originals are labels given to them by museum founder Cecil Williamson. However, the labels themselves offer a wealth of information about what the items were made of and the folk beliefs about them.

You can see some photos I took of a few of the works of art on display. At the top is a somewhat softer version of a nail supposedly used to slay a vampire in Italy. One of the items on the table in the photo below gives an artist's impression of a witch's whistle, supposedly used to summon spirits. 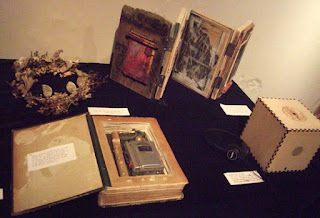 There are objects made from a wide variety of materials and also pictures and audio-visual displays. Some of them seem to be attempting to recreate the lost objects while others are more loosely inspired by the words on the old labels.

They are all fascinating, thought-provoking and intriguing. They might be art, but they are also, in their own way, still magical.

The same was true of the performance, which included haunting and eerie music, a film show offering glimpses of strange things, a live presentation of one of the rituals performed on film in the exhibition and poetry that turned words describing natural phenomena into a form of evocation.

Steve Patterson, author of Cecil Williamson's Book of Witchcraft, also gave a talk about the history behind The Art of Magic. He explained that some of the items had been swept to sea in the flood that devastated Boscastle in 2004, but that other items had been lost over time with no idea what had happened to them.

Perhaps some of these things will eventually resurface. In the meantime, these wonderful works of art give an impression at least of what some of them might have been like.

The Art of Magic exhibition runs until 28 July at The Horse Hospital, Colonnade, Bloomsbury, London WC1N 1JD. It is open from noon to 6pm every day. You can find out more here: https://www.thehorsehospital.com/events/the-art-of-magic

You can view Cecil Williamson's Book of Witchcraft on Amazon.

This is so interesting! Been fascinated with Cecil Williamson and the Museum of Witchcraft for ages. I was hopelessly entranced when I stumbled across a video doing research about Joan Wytte. It's on youtube now and I still love watching it. Sure you've seen it but I'm posting the link for others who may not have had the pleasure: https://youtu.be/x6mPFpyxzcU

Is there anywhere online that shows all the exhibits at The Art of Magic exhibition? I would go there myself but I'm in Alaska, USA. Hoping to get to Cornwall one day, so boring around here, no one shares my interests. Also thought I would let you know that the publisher Troy Books is selling the Special Edition Hardback (limited to 300 numbered copies) of Cecil Williamson's Book of Witchcraft for cheaper than Amazon is charging for the pedestrian paperback! The paperback on Amazon is £49.99 and the limited edition hardback from Troy Books is £39.50. Just bought the hardback from Troy Books. Woohoo!

Forgot to post the link for Cecil Williamson's Book of Witchcraft on Troy Books.
http://www.troybooks.co.uk/cecil-williamson-book-of-witchcraft.html

I bought the special edition of Cecil Williamson's Book of Magic from Troy Books at the Museum of Witchcraft conference last year. It is a brilliant book and that is a lovely edition.

The exhibits from the Art of Magic are going on tour and they might be put on a website later. You can find details on www.theartofmagic.info.