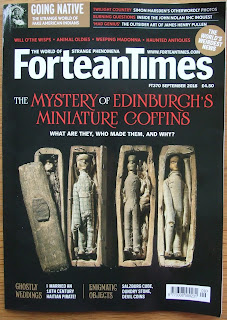 The latest issue of Fortean Times has arrived on my doorstep and I am really excited to see it contains a feature on the 17 miniature coffins containing effigies of men found in Edinburgh in 1836.

I mention the Edinburgh figurines my book Pagan Portals - Poppets and Magic Dolls in my entry on dolls of remembrance:


Dolls of Remembrance
[Folklorist] Edward Lovett mentioned that in 1836 some boys found coffin-like boxes each containing a small doll in a concealed cave on Arthur’s Seat, Edinburgh. He said similar boxes had been discovered in Germany and Brittany. There the folklore was that if a sailor was lost at sea and the body not recovered, a small doll or cross was made to represent the person, put in a box and a service for the dead performed over it. Those dolls were all put into one place, usually under the effigy of Saint Nicholas – the patron saint of seamen as well as famed for giving toys to children at Yule.
Even today, a doll can be a wonderful way to remember and honour a loved one who has passed on. If possible, use clothing and other items that belonged to them to make either the entire doll or its clothing. If you have a lock of their hair – or just a strand or two from their comb or hairbrush, include that in the doll. You can adorn it with jewellery or other small trinkets that belonged to them.

The Fortean Times goes into more details about who the Edinburgh figurines might represent. Possibilities include grave robbers Burke and Hare's 17 victims, and the leaders of a popularist uprising in Scotland in 1820. Some of the rebels were executed, while others were transported to Australia. The idea that the dolls were drowned sailors is considered less likely nowadays because the miniatures are not dressed like sailors and no ships had sunk with large-scale loss of Scottish seamen at around that time.

The article gives the most detailed look at Edinburgh's Miniature coffins that I have come across. I wish I had been able to read it before I wrote my book. 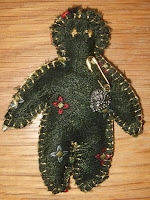 But, whatever spell or rite those particular dolls were intended for, the idea that you can make a miniature doll to remember or honour someone you will never see again is still a valid one.

I made a small poppet to remember my father by, out of the fabric of one of his ties. You can see it in the photo on the left.

If you are interested in the history and folklore relating to poppets and magical dolls, I would strongly recommend reading the Fortean Times' article on the Edinburgh coffins. The magazine currently has a special offer allowing you to order 3 issues for £1 if you subscribe. You can find out more here: https://subscribe.forteantimes.com/

You can view my book Pagan Portals - Poppets and Magical Dolls on Amazon.