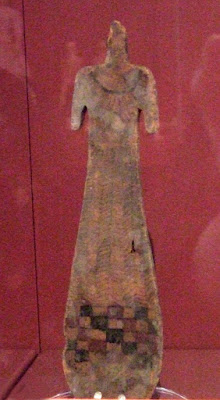 This is the oldest doll in the collection of the Museum of Childhood. It is a paddle doll that was made in Ancient Egypt in about 1300BCE. It is carved from wood in the shape of a paddle, which is where the name comes from.

There is also an Egyptian paddle doll in the Cuming Museum collection, which you can view online. The Cuming's website describes it as being a ceremonial object with a magical function as well as being just a child's toy. It says:


One side has the faint remains of a painted figure of the hippopotamus fertility goddess Taweret, who protected women during childbirth.
The doll would originally have had a 'wig' of clay beads strung on cord attached to the head. Paddle dolls were a stylised depiction of a woman with an emphasis on the hips and pubic area. They were used as toys but had a ritualistic and protective function, particularly as a fertility symbol.

The Petrie Museum of Egyptian archaeology has several examples. You can see some in the museum or view them online. Paddle dolls were often painted red and black and sometimes had exaggerated drawings of the female genital region, which makes sense if they were meant as fertility symbols.

As I say in my book Pagan Portals - Poppets and Magical Dolls, in Ancient Egyptian civilisation, image magic using figurines was very popular. I will be blogging about other examples in the future.

In the run-up to my book launch I have been blogging about magical dolls you can see in museums around England. These include Merrythoughts and Akua'Ba in the Museum of Childhood, good luck dolls from the Museum of Witchcraft and Magic and a healing doll from the Horniman Museum. My intention is to show that poppets aren't all about sticking pins and cursing!

My book is officially published on August 31. On September 8; I will be reading from Pagan Portals - Poppets and Magical Dolls at Wicca Moon, 50 Well Hall Road, London SE9 6SH at 2pm. For further details contact Shirlee@wiccamoon.org.uk, call 0208 850 7803 or visit www.facebook.com/WiccaMoonEltham/or www.wiccamoon.co.uk

You will be able to buy copies at Wicca Moon. You can also view Pagan Portals - Poppets and Magical Dolls on Amazon and order the book from Treadwell's.

The Museum of Childhood is at Cambridge Heath Road, London E2 9PA, the Petrie Museum is at Malet Pl, Bloomsbury, London WC1E 6BT.