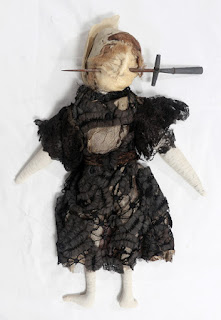 I was particularly looking for examples of magical dolls when I visited Spellbound: Magic, Ritual and Witchcraft, which is currently on at the Ashmolean in Oxford. As anyone who has read my blog recently will know, my own book on poppets was launched just last week.

Anyway, I was really delighted to see in the exhibition several poppets, effigies and figurines that had been used for spells and rituals in times gone by.

Most people think of poppets as being curse items - made in the shape of a victim and then pricked with with pins, thorns or knives with the intention of causing harm. There are two examples of that at Spellbound. One is the doll you can see in the photo on the left, from the Museum of Witchcraft and Magic. Another is a Chinese wax doll stuck with pins, on loan from the Pitt Rivers museum.

One of the questions posed to visitors at the start of Spellbound is: 'Could you stab the image of a loved one?' It is intended to show that many of us have a tendency towards magical thinking. Even if we don't really believe witchcraft works, we could feel reluctant to poke a pin in the face of a picture of someone we love. 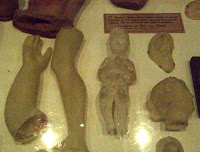 Spellbound isn't all about curses and has on show more dolls and effigies that were intended to heal or protect. In medieval times, it was relatively common for people to leave wax figurines at cathedrals or other sacred sites. These might be in the likeness of themselves praying, someone in need of a cure, or a limb they hoped would be miraculously healed. They were intended to act as a representative or double after the person themselves had long left the location. The colour of beeswax is a similar to flesh tones, which is one of the reasons it was used quite a bit at the time.

The one at Spellbound is of a woman praying, although the wax models in the photo to the right show examples of votive effigies at the Pitt Rivers museum. No one is allowed to take photos inside Spellbound, so I had to make do with a picture I took at the museum down the road.

The exhibition also has a large display of objects that had been concealed in chimneys or attics to protect the home. Two of these are dolls - a tiny wooden figure found in a roof beam and a cloth doll discovered with pages from a Bible. I was delighted to see that the latter, which was made from a square of fabric wrapped and knotted with string, was similar to the dolls of remembrance I blogged about in the past.

Spellbound: Magic, Ritual and Witchcraft runs until 6 January 2019. Tickets are £12.25/£11.25 concessions. You can find more details here: https://www.ashmolean.org/spellbound You can view the printed book accompanying Spellbound on Amazon.

You can find out more about my own book, Pagan Portals - Poppets and Magical Dolls, at publisher Moon Books' website.

The photos on this page show a poppet of stuffed fabric in Edwardian-style black dress with  a stiletto through face from South Devon, 1909–13, © The Museum of Wtchcraft and Magic, Boscastle, votives at the Pitt Rivers museum, and the cover of the book Spellbound: Magic, Ritual and Witchcraft.