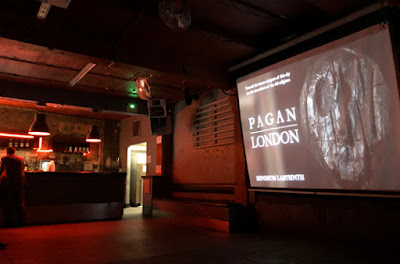 As the premier of the new Fantastic Beasts movie was being advertised in London with a row of erect wands  (oo err missus), the film premier I was most excited about was Pagan London by Minimum Labyrinth.

The short films are being serialised on the Londonist YouTube channel, but there was an early chance to see all 12 episodes back to back on the big screen at Café 1001, a trendy venue on Brick Lane.

It was a brilliant evening, hosted by Robert Kingham who created Pagan London along with cameraman Jeremiah Quinn. As well as enjoying the full-length screening and a couple of glasses of Brick Lane IPA, I got to meet up with some old friends including Geraldine and Bali of The Atlantis Bookshop.

Pagan London examines the evidence of paganism on the banks of the Thames from prehistory up to the revival of Druidry and the popularising of Wicca in the 20th century. Episodes cover the Stanwell Cursus, the Temple of Mithras, Cleopatra's Needle, effigies of pagan gods that have been discovered by archaeologists under the city and various theories about London's pagan past.

If you ,missed the screening, you can watch the first few episodes of Pagan London on the Londonist YouTube channel here: https://www.youtube.com/channel/UCMB8HFoi_QUoGsoRRHyZGAQ

You can connect with Minimum Labyrinth on Facebook (@MinimumLabyrinth), Twitter (@min_labyrinth), and through www.minimumlabyrinth.org, where you can find details of Robert Kingham's guided walks and other projects.