Review: The Thin Veil of London - Book of the Walk 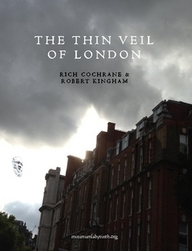 I so enjoyed the guided walk into horror writer Arthur Machen's London that I went on recently, I bought the book.

Both the walk and the book are called The Thin Veil of London and cover a journey into the minds of the great thinkers, visionaries, scientists, poets and writers who lived in the area around Bloomsbury and Holborn. The authors are Rich Cochrane and Robert Kingham, who previously performed Align, about London's myths and psychogeography.

The blurb at the back of The Thin Veil of London says: "A single idea passes like a delicate thread from the scientific Enlightenment through Romanticism and the Victorian age: that of a veil behind which true knowledge may be found by those able to draw it aside."

It looks at how the line has been drawn between madness and sanity, science and magic, religion and mysticism, experience and logic. It looks at the conflicting theories of philosophers, scientists, theologians - all of whom were trying to ascertain what is the true nature of reality and what, if anything, lies beyond our material world.

Arthur Machen's tales are used as the backdrop to this as the characters in them are often also exploring those same themes. They glimpse fabulous realms behind the bricks and mortar of London's buildings that can perhaps be reached through dreams, contact with otherworldly forces, or at certain times of the day or year. Yet the price is often madness - and this is another theme that runs throughout The Thin Veil of London. It looks at how madness has been defined throughout history and leaves one wondering if, sometimes, a little insanity is a price worth paying for a chance to see for oneself the glorious vistas that lie behind the veil of our mundane world.

Both the walk and the book are full of thought-provoking ideas as well as teaching a huge amount about the history of Bloomsbury and its intellectual residents. The book goes into greater depth than the walk, and is worth taking time to read and mull over. I'd recommend doing the walk first, and there are still dates this summer with a few tickets available. But if you can't get on the walk, buy the book and wander the streets of Bloomsbury yourself looking at the places mentioned. It does include maps showing the important locations.

For more information and to book tickets for events, visit the Minimum Labyrinth website: http://www.minimumlabyrinth.org/the-thin-veil-of-london.html The book costs £12 and you can order it here: http://www.lulu.com/spotlight/thin_veil_of_london