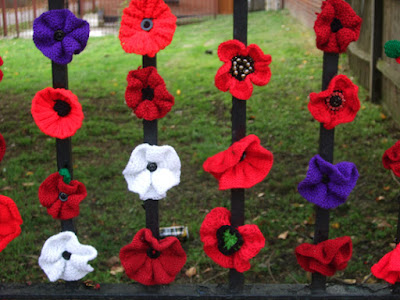 Tomorrow - Sunday 11 November 2018 - is the 100th anniversary of the end of the First World War. It is both Armistice Day, marking the date the armistice was signed between the Allies and Germany that brought the end of WWI in 1918, and Remembrance Sunday, an annual event acknowledging those who died in WWI, WWII and other wars.

Many people have traditionally chosen to wear a red poppy in memory of those who died in war, while some prefer a white poppy because they feel the red one glorifies war rather than promoting peace. Some choose a purple poppy to honour animals that died in wartime. 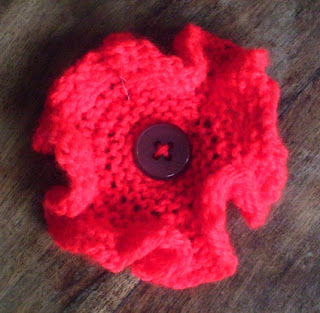 A group of crafters in my area have knitted and crocheted poppies of all colours and attached them to the railings by the war memorial in my local park.

In fact, it is the second year running they have done this. Sadly, the ones they lovingly and painstakingly created last year were torn down by some yobs - much to the anger of residents. Undeterred, the group created an even more impressive display this year. The photo above shows just a tiny section of their work to honour those who died in war and to wish for peace. Mind you, there are obviously still at least one yob around, judging by the dumped drinks can in the background of the photo.

Inspired by the crafters' work, I decided to knit my own poppy, using a pattern I found online from the Big Poppy Knit 2014: http://counties.britishlegion.org.uk/media/4069303/Poppy-Patterns.pdf

That link gives instructions for 4 different poppies, both knitted and crocheted. I decided to do the easiest knitted one. Here's the pattern copied, just in case the link doesn't work:


Easy garter/knit stitch pattern for beginners
Colour A Red (one ball will make a lot of poppies!)
Colour B Scrap of Black or a black button

Centre of Poppy
Using B, cast on 16 sts. Cast off. Coil into a tight spiral and sew base to the centre.
Or use a black or green button with 4 holes and sew to centre of poppy. Add pin.

You can see my effort in the photo to the right. I am wearing it with pride.